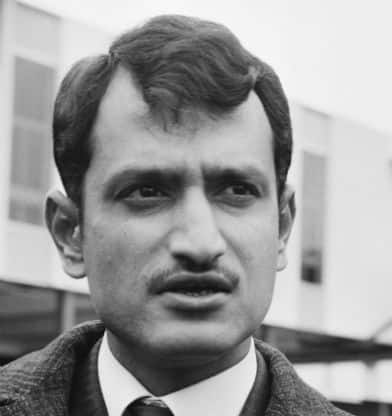 Ajit Wadekar’s name will always be written in gold in the history of Indian cricket for the twin victories in West Indies and England in a space of months. He then led India to a win over England at home. India then lost a series in England, and poof! Wadekar was not only sacked, he was dropped for good.

Despite his bony frame, Wadekar could smash the ball extremely hard. He developed a technique unique to his own, batting with an open stance with his feet wide apart. He slammed 15,380 runs at 47 in a First-Class career that spanned 17 years. In Ranji Trophy alone his 4,388 runs came at 59. He was the fulcrum of the Bombay side during their famous run in the 1960s; the streak came when he slipped and got run out in the semi-final of 1972-73.

His best innings, a whirlwind 323, came against Mysore in 1966-67. On India’s tour of Australia in 1967-68, Sam Gannon knocked his tooth out with a bouncer and clean bowled him next ball in a tour match.

He came to his elements in New Zealand, where India won their first Test and series away from home. At Dunedin he scored 80 and 71, and at Wellington, a career-best 143. India won both Tests, and Wadekar led the charts with 328 runs at 47.

He famously replaced Mansur Ali Khan Pataudi as captain after Vijay Merchant’s casting-vote, and produced instant results with his twin victories. He confused Garry Sobers, asking him to follow-on after a 170-run lead (rightly so, for it was a four-day Test), and bothered the Sobers even more when he locked Sunil Gavaskar — lucky charm for the ‘great man’ — in the bathroom.

He unleashed a four-pronged spin attack at Queen’s Park Oval, and India, fortified by some splendid batting from Dilip Sardesai and Gavaskar, won their first Test against West Indies.

In England, Wadekar left EAS Prasanna out in favour of Bhagwat Chandrasekhar, who bowled in tandem with Bishan Singh Bedi and Srinivas Venkataraghavan. The decision did not go down very well with Prasanna, but it led to India’s maiden Test and series victory on English soil.

India were set 173 in the historic Test at The Oval. After Gavaskar fell for a duck, Wadekar smashed 45, returned to the dressing-room, and fell asleep, missing out on history being created under his leadership. The next winter he led India to a series win after England went up 1-0.

Unfortunately, India played terrible cricket in England in 1974, the ‘Summer of 42’; to make things more complicated, there were disciplinary issues raised against the team. His career came to an end, though not before he became India’s first ODI captain.

After he was dropped from the West Zone Duleep Trophy side (he was their captain at that time), a fuming Wadekar announced retirement from First-Class cricket.

He served India as manager in the 1990s, forming an excellent rapport with captain Mohammad Azharuddin. During their tenure India did not lose a single series at home. During this period he suffered from a heart-attack in Sharjah, where India were playing the Austral-Asia Cup.

In 1998-99 Wadekar became the second cricketer after Lala Amarnath to assume the roles of captain, manager (or coach), and Chairman of Selectors of the Indian cricket team.