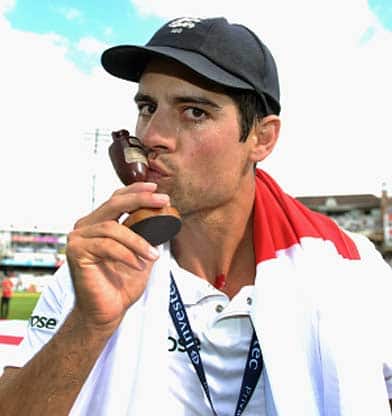 Seldom has a batsman displayed such mindless appetite for runs the way Alastair Cook has. He has owns most aggregate records by Englishmen, and is already touted as one of the finest in the pantheon of English champions at the top of the order. He is not yet 30, and has been, at various stages of his career, been considered by English pundits as the man who will break Sachin Tendulkar’s records in Test cricket.

Technically sound and proficient both off the front-foot and while playing back, Cook is your quintessential Essex batsman; he has an excellent assortment of strokes but prefers to hold most strokes back — and on his day the bowlers need to go over his corpse to get him out.

Cook had started off with 60 and a hundred on Test debut, and went through a run of highs and lows before finally coming of age with his excellent display against Muttiah Muralitharan at SSC and Kandy in 2007-08. Following another slump, Cook roared back into form with a 118 at Kingsmead — the innings that was eventually responsible for England drawing the series.

Cook’s finest hour came when he scored 766, playing a pivotal role in England’s whopping Ashes triumph in Australia in 2010-11. It remains the second-best for any English batsman in an Ashes series. He scored a career-best of 294 against Edgbaston the following summer.

After a short stint in Bangladesh, he was appointed full-time captain in 2012-13. As captain he won a Test series in India, becoming the first England captain to do so in well over three decades, and retained the Ashes at home, before his captaincy received a serious jolt with a humiliating Ashes whitewash Down Under.