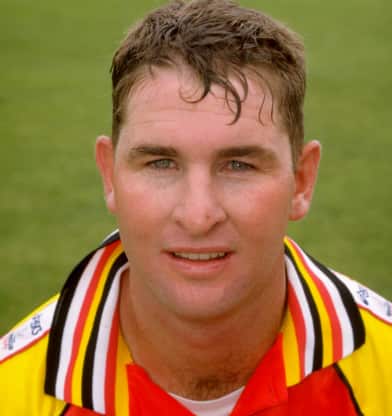 Campbell led Zimbabwe in 86 ODIs, significantly more than anyone. In Test cricket, he leads the table jointly with Heath Streak, leading in 21 Tests.

He led Zimbabwe to two of her most famous Test wins, against India at Harare and against Pakistan at Peshawar, both in 1998-99. He also led them to unprecedented glory in the 1999 World Cup, where they beat both India and South Africa en route the Super Sixes.

Years before that, Campbell was hailed as a teenage prodigy. He went to Lilfordia Junior School, where he created a record for making it to the school team at a mere 8. At this stage he, like several Zimbabwean cricketers of the era, was groomed by his father Iain. His brother Donald kept wickets for Mashonaland.

He was still in school and was a mere 18 when he scored 100* (he became the youngest Zimbabwean to score a First-Class hundred) and 63, and was fast-tracked into the side for the 1992 World Cup squad. He also featured in Zimbabwe’s first ever Test later that year.

A powerful hitter of the ball, Campbell could not do justice to his talent at any level. He could never play those long innings, and averaged less than 34 even at First-Class level. His first hundred took 47 Tests, and his highest remained a mere 103; and despite his ability to hit the ball, Campbell’s ODI strike rate languished in the mid-60s (though he is one of the four men from the country to score 5,000 ODI runs).

However, the most telling statistic of Campbell’s career was the fact that he failed against every single nation barring Bangladesh, averaging 31 or fewer against all of them.

Despite that, there were streaks of brilliance, and none more than the outrageous 55-ball 63 against Wasim Akram and Waqar Younis at Rawalpindi in 1993-94 — an innings that ended in a dodgy leg-before decision.

Campbell was a capable leader and an excellent fielder, and bowled off-breaks as well; unfortunately, his bowling is most remembered for the Rajkot ODI of 2000-01, when he, for some reason, took last over and conceded 21 runs to Ajit Agarkar.

He taught at his former school as Zimbabwe cricket went through a stage of turmoil. However, when the board brought several former cricketers back to mainstream, Campbell was appointed Chairman of Selectors in 2009-10.