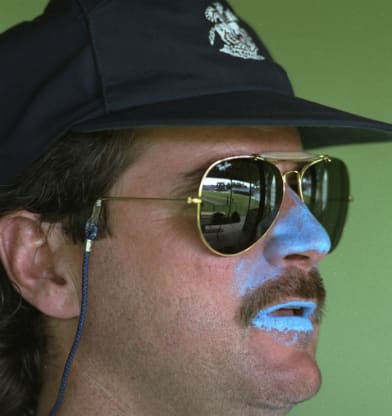 Recruited to Northamptonshire from Western Province and then a regular for the England middle order through the 1980s, Lamb had a curious career. His figures look mediocre, his average in the mid-30s. His numbers look similar, just a bit deprecated against the mighty West Indies of his era. However, look closely and you will find that the gutsy man with his stocky build and thick moustache had 6 hundreds against the West Indian pacers, each one an innings of rare quality. Three of them came during the 0-5 blackwash of 1984.

While a poor tour of 1985-86 raised questions about his ability to face the West Indians in their backyard, Lamb responded with another hundred when the men from the Caribbean visited England in 1988. And finally, in 1989-90, he enjoyed a dream tour, hitting hundreds at Kingston and Bridgetown and averaging 55 over his 390 runs, even leading England twice.

But when the West Indians returned in the summer of 1991, Lamb was past his best and produced a string of low scores that undid a lot of the good work from the point of view of overall figures against the mighty team.

With a supreme ability to get under the skin of bowlers, Lamb was also an asset in England’s ODI side, and a major force in the World Cup campaign of 1987-88 in which he scored nearly 300 runs at 60. He also played in the 1983 and 1992 World Cups. However, the most memorable achievement of his ODI career was plundering Bruce Reid for 18 off 5 balls at Sydney to clinch a victory with one ball to spare.

A magnificent contributor to the fortunes of Northamptonshire, Lamb also appeared in talk shows with buddy Ian Botham, and courted infamy during an unsuccessful trial that Botham and he fought against Imran Khan.