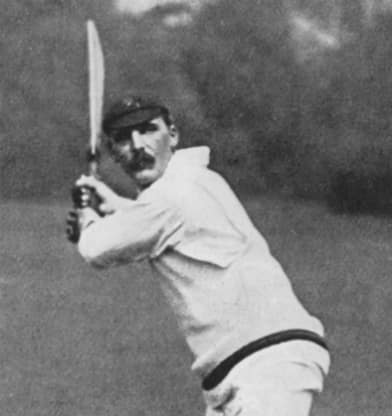 On the field and with the bat Archie MacLaren was often regal, majestic, and sometimes not quite so brilliant.

His batting was characterised by his high back-lift, full follow-through, and surefooted movements towards front or back. He often held his pose after playing a stroke, which made him a delight to watch. He was a powerful driver and a superb hooker. He ended his career with 22,236 runs at an average of 34.15. In 35 Test matches, he scored 1,931 runs at 33.87 with five hundreds. He scored fast and did so with all the aesthetic brilliance to make Neville Cardus an unabashed admirer for life. His 424 for Lancashire against Somerset, scored in 1895, stayed a world record in First-Class cricket for 28 years before being surpassed by Bill Ponsford, and remained the highest score in England for 99 summers before Brian Lara hit 501 in 1994.

Possessing the keenest of minds in the game, he sometimes excelled as a captain, but the blunders made by his demanding autocratic nature and obstinacy have outweighed the merits by far. And finally, off the ground he was an abject failure, constantly short of money, with a life littered with failed business ventures. He was also an overbearing bully, brusque, brutish, prejudiced and pig-headed.

Never mind the hero worship of Cardus, that was far from the truth. But, MacLaren was quite a character.

22 of the Tests he played were as captain of England, all against Australia, winning four and losing 11. He lost all the four Ashes series in which he led the team. Some of his tactical blunders are feats of legends in themselves, and some of his celebrated comments in the field and the dressing room leave no doubt as to his shortcomings as a leader.

And after his playing days were virtually over except for a few sporadic returns, he tried his hand at every possible venture — from being a banker to a teacher to an unsuccessful coach, from acting as the secretary of KS Ranjitsinhji in India to assuming the role of a limousine salesman. This included a stint as cricket manager for the private team of businessman Lionel Robinson.

MacLaren also arranged for the all-conquering 1921 Australian team under Warwick Armstrong to play a match at the cricket ground of the Robinson estate. The home team was selected and captained by MacLaren himself. The Australians were dismissed for 136 and conceded a 120-run lead as the match ended in a draw. Later that season, MacLaren led an ‘An England XI’ against the tourists on the invitation of Eastbourne Cricket Club. The all-amateur team, handpicked by MacLaren, won by 28 runs after being bowled out for 43 in the first innings. MacLaren himself scored zero and five, but he was instrumental in inflicting the first defeat on the till-then rampaging visiting side.

MacLaren tried to run a magazine that failed and also attempted to start a stud farm that failed even more spectacularly. He also attempted the impossible of channelling his thoroughly unwelcoming demeanour to run a hotel, to manufacture inflatable cricket pads and to make bats from Spanish willow, and finally even turned up in Hollywood and played a small role in a movie as an extra in Alexander Korda’s The Four Feathers — a walk-on part as a monocled veteran of the Crimean War.

MacLaren passed away in 1944 after a bout with cancer.