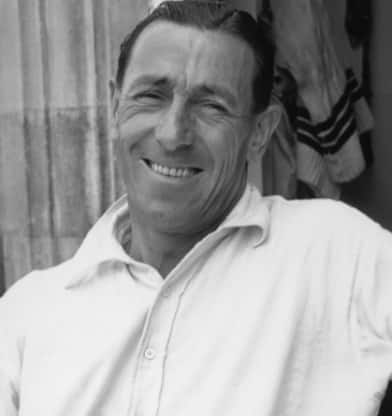 David Foot classified Wellard as a village blacksmith cricketer as well as an England player.
On the field his major job was to bowl fast-medium, and he was good enough to open the bowling for England. However, Arthur Wellard will always be remembered for his spectacular big hits.

He scored 12,485 runs in First-Class cricket, mostly for Somerset, at a rather modest average of 19.73. With the ball, he was distinctly more successful, 1,614 wickets at 24.35. What remains amazing is that the sixes he hit numbered over 500, amounting to roughly a quarter of his career runs.

Wellard bowled fast-medium, and could make the ball break back dangerously — reminiscent of Tom Richardson. When the ball was old or the wicket taking spin, he could send down accurate, and often incisive, off-spin, mostly from round the wicket. He was also a superb fielder close to the wicket.

As a tall, powerfully built, loose-limbed batsman he was no mere slogger. He had a good, if sometimes awkward and always reluctant, defence. He was reasonably consistent — remarkably so given his penchant for the huge hit. He batted well enough to score a couple of hundreds in First-Class cricket. His hits were based on solid scientific theory: drives hit hard enough, high enough and long enough cannot be caught by any fielder.

He was considered a steady all-rounder. Ultimately awarded a Test cap against New Zealand at Old Trafford in 1937, he captured 4 for 81. His other Test came at Lord’s against Australia in 1938. It was a fine all-round performance. After bowling decently enough, he scored 38 in the second innings, adding 74 with Denis Compton. He played his part in rescuing England from a possible defeat. During this innings he played the famous pull-drive off McCabe that landed in the balcony of The Grandstand. His efforts would have won him a place in the England side for the tour to India had the War not intervened.
He also went to India to play a series of unofficial Tests under Lord Tennyson in 1937-38, and received reasonable success, mainly with the ball.

Twice he hit five sixes in an over. On the small home ground at Wells, he launched into Tom ‘Tosser’ Armstrong of Derbyshire in 1936. Wellard had taken 9 wickets in the match, and Somerset needed 274 for win when he came in at 140 for 5. Armstrong was a decent enough left-arm spinner, but that day Wellard struck him for five sixes off consecutive balls. He scored 86 in just over an hour, and Somerset won by 1 wicket.

Two years later, he was once again on fire at Wells, this time against Kent. Wellard smote Frank Woolley for 5 mighty sixes, and was dropped off the sixth ball by Bryan Valentine just in front of the sightscreen, a single resulting in the bargain. Woolley finished with none for 40 off 2 overs, and Wellard scored 57 and 37 along with 13 wickets in the match, including Woolley’s prize scalp in both innings. Somerset won by 27 runs.

Till Garfield Sobers hit Malcolm Nash for six sixes at Swansea, Wellard’s feats stood as the record for the most sixes in an over.