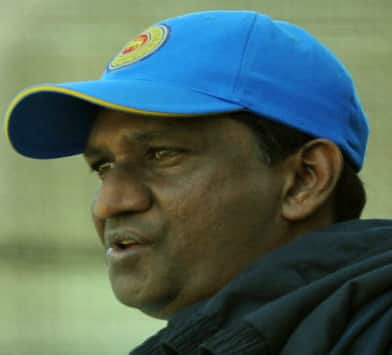 Ashantha de Mel was the first Sri Lankan spearhead. He could bowl those tantalising out-swingers that tempted batsmen to reach out for them; and he had a bouncer vicious enough to hit Richie Richardson on the face and force Clive Lloyd to bat in a helmet.
He was the first Sri Lankan to take 50 wickets in both Tests and ODIs, and finished with 59 wickets in each format. His strike rate of 59.6 in Test cricket is superior to the numbers of Chaminda Vaas and Rangana Herath. He also took 31% of all wickets Sri Lanka took in the Tests he played. He was also a hard-hitting lower-order batsman, and had a First-Class hundred.
It was a shame that his career met a premature end at a mere 28 following a knee injury.
He opened bowling for Sri Lanka in their first Test (after taking 4 for 34 and 2 for 11 in 2 ODIs). In the Test he removed dismissed Geoff Cook, Chris Tavare, Graham Gooch, and Ian Botham to finish with 4 for 70.
When India went all guns blazing in chase of 175 at Madras in 1982-83, de Mel took 5 for 70, the first five-for by a Sri Lankan pacer. His wickets ensure a draw.
With 17 wickets at 15.58 de Mel became the joint second-highest wicket-taker in the 1983 World Cup. He took at least one wicket in every single of his 6 matches. He took 5 for 39 against Pakistan and 5 for 32 against New Zealand, the first ODI five-fors by a Sri Lankan. He also became the second (after Gary Gilmour in 1975) to take two five-wicket hauls in the same edition of the World Cup.
With 5 for 127 he also played a crucial role in Sri Lanka’s first Test win, over India in 1985; he also got 3 for 39 and 3 for 79 in the second, over Pakistan that winter.
Unfortunately, he ran into Viv Richards in the 1987 World Cup, and was taken for 97 runs, then the most runs conceded by anyone in 50-over matches.
De Mel also played rugby, and represented Sri Lanka in the Commonwealth Games at bridge. He worked as Chairman of Ceylon Petroleum Corporation, managed the national Under-19 side, and. was appointed Chairman of Selectors in 2004.
Abhishek Mukherjee