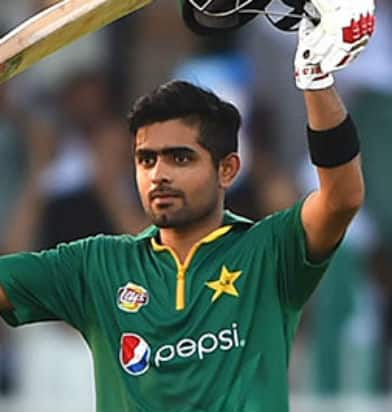 Babar Azam is an exciting young batsman who has come up through the ranks of junior cricket in Pakistan and is already touted as one for the future. First cousin to the Akmal brothers, Azam first made a mark when he captained the Pakistan team at Under-19 World Cup of 2012, where he ended up as the highest run-getter for his side scoring 287 runs from 6 games. He had earlier played the 2008 Under-15 and 2010 Under-19 World Cups.

Making his ODI debut in 2015, Azam made immediate impact by scoring a fifty when Zimbabwe made their historic tour of Pakistan. However, it was in 2016 that he announced his arrival: against West Indies in UAE he slammed a hat-trick of ODI hundreds, becoming only the third batsman for Pakistan to do so. He also became the only batsman to have crossed the 350-run mark in a 3-match ODI series.

An impressive showing in ODIs against West Indies led to a Test debut in the Test series that followed, where he scored 69 in his maiden innings. He later registered a fine 90* at Hamilton followed by two fifties in Pakistan’s maiden Test series win in the Caribbean.

At 22, Azam is already owner of a few records. He is the joint-fastest player to score 1,000 runs in ODIs and the fastest for Pakistan. He also had most runs (1,306) in first 25 ODI innings by any batsman in the world. In addition, he is also the fastest Pakistani and second-fastest batsman in the world to score 5 ODI hundreds, after Quinton de Kock.