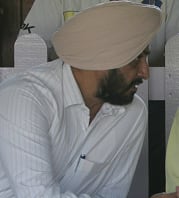 Bhupinder Singh Sr made up for his lack of pace with hours and hours of toil under the sun. He arrived in the domestic circuit, and rose up the ranks to emerge as the spearhead of the Punjab bowling attack.
He played a crucial role in Punjab’s maiden Ranji Trophy triumph, in 1992-93. He ended with 3 for 85 and 3 for 47 in the final against Maharashtra. His 36 wickets came at under 20, and along with Bharati Vij and Angad Bedi, he formed a trio that turned out to be unstoppable that season.
Punjab were defeated by 181 runs in the Irani Cup match, but Bhupinder emerged with his reputation unscathed, with 6 for 103 and 4 for 81. That season he also took 4 for 83 against the touring Sri Lankans.
Picked for the Austral-Asia Cup of 1994, he claimed 3 for 34 on ODI debut, against UAE. Unfortunately, he was hammered by Pakistan in the other league match, and was replaced by Venkatesh Prasad for the rest of the tournament.
Bhupinder was not recalled. Two seasons later even his domestic career was over. He later became a national selector, where he ran into controversy after making negative comments about Rahul Dravid and Greg Chappell.
Once through with his stint, he became coach of Punjab, and later an administrator in Punjab Cricket Association.
Abhishek Mukherjee