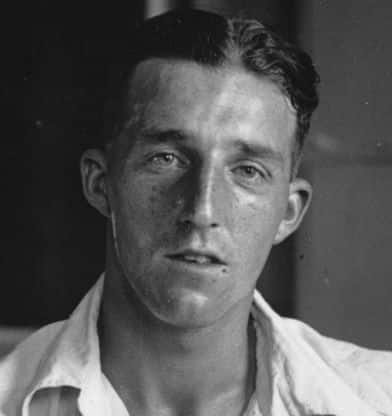 Edrich was never a noble, fluent batsman like his famed batting partner Denis Compton. If Compton approached batting like a dashing knight, propelled by the generous touch of genius, Edrich was the more street-smart. His bat did not swing in that arc of the greats, and neither did he revel in hitting down the ground. He relied on his physical courage and doggedness, a batsman the crowd would have identified with as one of their own, someone worthy of clasping to the bosom rather than worshipping on a hallowed pedestal. His grip was bottom-handed, relying on the cut, hook and pull-drive to score his runs. Possessing a wonderful eye, he was an asset against fast bowling and on bad wickets. Yet, quick as he might score on his day, he could not forget the humble roots of his batsmanship, and was prone to be watchful even while giving the ball a hearty thwack.

During his early days Edrich was a brilliant outfielder, but later his superb reflexes and quick movements were used in the slips. Till the injury of 1947, he was a more-than-useful fast bowler as well, his action reminiscent of the amateurs of village green, but the output often quick and disconcerting. “He hurled the ball down as hard as he could, the energy of his action carrying him halfway down the pitch, as though drawn in the draught caused by his velocity,” wrote Neville Cardus.

But, in the pace-less English post-War attack, he was often asked upon to run in and hurl down his deliveries.

His career might have included three more years of Test cricket had it not been for a macabre lifestyle that resulted in a ban in the late 1940s.

For Middlesex his final tally stood at 25,738 runs at 43.40 and 328 wickets at 30.41. However, the highest points were some gutsy shows against hostile Australian bowling and the seven-hours-40-minutes effort for 219 during the long, long Test at Durban. And of course there was the summer of 1947 when Compton and Edrich could do no wrong for Middlesex.

Convivial, hearty and much loved by his fellow players, Edrich drank much and married multiple times. He passed away after a fall at his Chesham, Buckinghamshire home in the summer of 1986.

The Denis Compton and Bill Edrich Stands are located side-by-side at the Nursery End of Lord’s Cricket Ground.