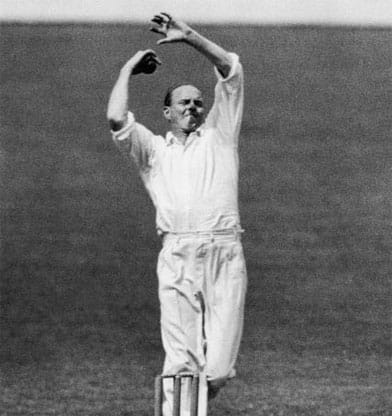 In his Farewell to Cricket, Don Bradman devoted a substantial section to the bowling of Bill O’Reilly titled “The Daddy of them all.”  When the leg-spinner passed away in 1992, the master batsman remarked that he was the greatest bowler he had ever faced or watched. These were more than significant tributes, because for most of their playing days and lives, the two men did not see eye to eye.

In the 1930s, wickets were made to order for batsmen to pile up enormous scores. These were the shirt-front, concrete-hard pitches which remained benign and true forever as Test matches were often played to finish. Yet, on these tracks, as batsmen batted armed with the license of eternity, O’Reilly ran in and conquered them.

He stood six feet two inches in his socks. His prematurely-balding crown glistened with sweat, because for him leg-spin was not an art of leisure. He gripped the ball in his huge right hand, and ran in to hurl down the leg-breaks, googlies and top-spinners at a pace that can be called fast-medium. Often balls would bounce to heights unknown to slow bowlers. As he followed through, the scowl made it clear that he hated the very guts of the batsman. Nature had intended to make a fast bowler, but glitch in the process had produced a demon leg-spinner. Not for nothing was he called ‘Tiger’.

According to RC Robertson-Glasgow, “As with those more florid opponents of legendary heroes, there seemed to be more arms than Nature or rules allow. During the run-up, a sort of fierce galumph, the right forearm worked like a piston; at delivery the head was ducked low as if to butt the batsman on to his stumps. But it didn’t take long to see the greatness; the control of leg-break, top-spinner and googly; the change of pace and trajectory without apparent change in action; the scrupulous length; the vitality; and, informing and rounding all, the brain to diagnose what patient required what treatment.”

O'Reilly was successful regardless of the surface, land or opposition. And his Ashes triumphs became stuff of legend. Even in the fast bowling dominated Bodyline series, he picked up 27 wickets. The following Ashes tour of 1934 got him 28, which included a match-winning 7 for 54 in the Trent Bridge Test. After lording over the weaker South Africans, he played England again in 1936-37 to capture 25 more, eight in the decisive final Test.

On the tour of England in 1938, bowling was a backbreaking ordeal as tons of runs were plundered. But, O’Reilly continued to sprint in and hurl down his leg-breaks, picking up 22 wickets in the Tests. Even when England piled up 903 for 7 at The Oval, O’Reilly's figures read a dogged 3 for 178 from 85 overs. At Leeds, he won the Test for Australia with five wickets in each innings.

He ended with 144 wickets at 22.59 — perhaps the greatest leg-spinner to have played the game.