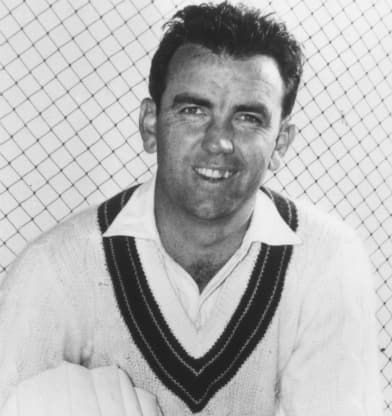 Few have served Australian cricket to the extent Simpson did. When Kerry Packer took away the crème la crème of Australian cricket, he came out of retirement at 42 to lead them. He was their coach during their resurgence in the mid-1980s, and was there when they won the World Cup in 1987 and regained The Ashes in 1989 and the Frank Worrell Trophy in 1994-95.

Before all that, Simpson served Australia throughout the 1960s in multiple roles. He scored close to 5,000 runs, almost entirely at the top, forging a formidable pair with Bill Lawry. His stance was easy, and when he decided to give it a thwack, he used his beef to hit them incredibly hard. He could also bat for hours (he has a Test triple-hundred). He took 71 wickets with his guileful leg-breaks; and was perhaps the most outstanding slip fielder of the era, taking 100 catches.

Simpson and Lawry were first paired up in the historic Old Trafford Test of 1961. They added 113 in the second innings. At the top of the order they would add 3,596 runs between them at 61. Put a 2,000-run cut-off and they come third on all-time list. At Kensington Oval in 1964-65 both Simpson and Lawry scored double-hundreds, adding 382.

Interestingly, his first Test hundred came as late as in 1964 — once again at Old Trafford — after he had scored 40 First-Class tons. That Test hundred amounted to 311 (in 762 minutes), and he had double-hundred partnerships with both Lawry and Brian Booth during the innings. That year he scored 1,381, a world record for most runs in a calendar year at that time.

By that time Simpson had been appointed captain. His brand of leadership (playing defensive after going 1-up in a series) often attracted criticism, but he did not change. His stint was also marred by his criticism of the Ian Meckiff’s bowling action in his autobiography: the litigation lasted five years, and ended only after Simpson apologised to Meckiff and settled matters out of court.

Simpson’s first stint ended in the India series of 1967. He led in the first 2 Tests but was rested for the third. When he returned for the fourth, he played under Lawry, thus becoming one of a handful Australians to play a Test after resigning.

He came back at 42 to help a Packer-hit Australia. He led a third-string Australia to a 3-2 win over India. He scored 539 runs himself, and had 4 wickets and 6 catches. He also led them to West Indies at their den, where he set the new world record for most catches.

His daughter Kim married Andrew Hilditch, who played 18 Tests and 8 ODIs and acted as Chairman of Selectors for Australia. Hilditch played his first international match a mere nine months after Simpson’s last.

He was inducted in the Australian Hall of Fame in 2006.