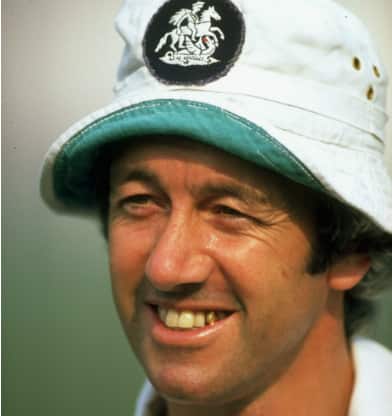 One of the best wicketkeepers to don the gloves, Bob Taylor should have played at least twice the number of Tests he did — but for having to share much of his cricketing days with Alan Knott. It did not help that Knott was five years younger.

Having earned one solitary cap after having gone to New Zealand as Knott’s deputy, an act of kindness from skipper Ray Illingworth, Taylor had to continue his duties for Derbyshire for seven more seasons till his next England call up.

According to many Taylor was the better wicketkeeper. However, Knott was far superior with the bat, and his partnership with Kent and England left-armer Derek Underwood was legendary. Hence, his position behind the stumps remained indisputable.

However, things changed with the entry of a man called Kerry Packer. As Knott signed to play World Series Cricket, Taylor, at the age of 36, slipped his hands into the big gloves of England. After that he played 56 more Tests, keeping with perfection till he was 43. Knott returned for only one series against the West Indies and made way yet again.

The 174 victims from the 57 Tests were just rewards for the perseverance of the man. The 1,649 dismissals in First-Class cricket have placed him at the top of the all-time list. And while he remained a dogged grafter down the order rather than a genuine batsman as Knott had been, Taylor did hit three half-centuries for England.

Taylor’s tales with the bat are bracketed by two tales of sportsmanship, and he found himself on either side of the act. At Adelaide in 1979 he battled five hours to reach 97 before sending a faint tickle down leg off Rodney Hogg into the wicketkeeper’s gloves. The umpire was undecided but Taylor walked three short of what would have been his only hundred in Test cricket.

And then there was the Jubilee Test in 1980. At Bombay, the ball from Kapil Dev went past his batand was pouched behind the stumps by Syed Kirmani. Umpire Hanumantha Rao raised his finger. England had slumped to 85 for 6. But the Indian captain Gundappa Viswanath was convinced that Taylor had not snicked. As a bemused crowd looked on, he persuaded the umpire to change his decision. Taylor continued his innings, much to his own amazement and batted 275 minutes to score an invaluable 43. Coming together with the side tottering at 58 for 5 Ian Botham and Taylor added 171 and England emerged victorious.

Two years after retirement from First-Class cricket, Taylor was at Lord’s during the 1986 Test against New Zealand, enjoying the cricket enjoying the facilities of the hospitality tent. And suddenly he was summoned for national duty once again, at the age of 45. Bruce French, the wicketkeeper, had been struck on the head by a ball from Richard Hadlee and the replacement behind the stumps, Bill Athey, was having a torrid time. After hasty consultations, and the consent of Kiwi skipper Jeremy Coney, the team management sought out Taylor and coaxed him to keep wickets. The retired man gleefully re-entered the scene, with borrowed kits and his own gloves that he carried around in his car. Taylor kept that day without blemish. The next morning, Bobby Parks, the Hampshire wicketkeeper, was drafted to replace him.

On field and away, Taylor was always a good listener, willing to be there for the teammates to unburden their problems. It was for this reason that he was nicknamed ‘Chat’.