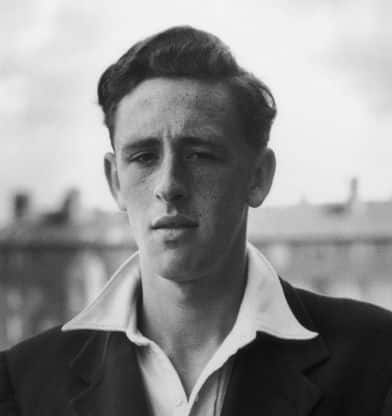 Incredibly for someone who rose to fame as a fast bowler, there was hardly a soul in the cricketing world or elsewhere who had anything but the utmost respect for this honest, toiling bowler who served England and Lancashire for many a year.

There was indeed little to dislike in Statham. Long, lean and laconic, he was a workhorse almost all through his career. Make no mistake about it: he bowled fast. With time he worked on his speed, developing into one of the fastest of his era. He was as competitive as the next man. Yet, intimidation was not his way. Nor the theatrics associated with nasty, fast men. Throughout his career, he remained the Nice Guy. Even Lancashire county authorities relented in their rather austere unwritten rules and made a fast bowler the captain of the side, because his name was Brian Statham.

His style depended little on digging the ball into the pitch and making it rear up at the batsman’s chin. Almost always he was more of a ‘ducks and drakes’ paceman who skidded through, much like a flat stone across the surface of a pond. His balls were much more likely to do damage to the toes than the head. And never did he bounce a tail-ender, no matter how extenuating the circumstances.

During the Port-of-Spain Test of 1953, West Indian paceman Frank King split the eyebrow of Jim Laker with a largely unnecessary bouncer. In a subsequent match, Statham found King facing him and his partner-in-crime Fred Trueman, urging him to let King ‘have one’. Statham disagreed, “Nay, I think I’ll try to bowl him out.”

The Yorkshire-Lancashire duo of Trueman and Statham formed one of the best fast-bowling pairs of all time. When Statham retired, he held the world record for the number of Test wickets, having gone past Alec Bedser. A few years down the line he was overtaken by Trueman.

Statham stood at 6 feet, lean and spare in spite of his fondness for beer. He ran in tirelessly even though he gave up smoking only after he gave up cricket. His run up consisted of 17 paces, all the while leaning forward and gliding over the distance with a fluid motion.

As he delivered, he would be open at the shoulders, his eyes looking the batsman over the unorthodox side of his leading arms. His hips and crossed legs would assume the classical closed position. It lent credence to his incredible flexibility. His legs preceded his body into the final step, at an impossibly acute angle and often his right boot would land on the side of the sole where there were no studs to prevent him from slipping heavily. The arms performed a curious routine — the left pointed up while his right circled as if from 11 o’clock back to 11 o’clock on the face of a clock.

Statham was double-jointed at his shoulders and elbows. One of the tricks that astounded onlookers was his removing his cricket sweater by reaching over his left shoulder with his right arm, grasping the hem and pulling it over the head. Hence, the bowling arm bent beyond 180 degrees at the elbow, a sort of chucking action in the other way.

He did not swing the ball much, but was the master of the break-back — in the tradition of Tom Richardson. It would cut into the batsman from wide outside the off-stump even on the most placid of wickets. According to Frank Tyson, “He bowled it by placing the first two fingers of his hand on one side of the vertical seam, with the remaining fingers spread and tensed on the opposite side of the ball. At the moment of release, he snapped the index and second finger from off to leg, imparting a vicious cut.”
Alongside his bowling, he was a superb outfielder with fast accurate throws and safe hands. He retired in 1968.

Unfortunately, financial problems continued to hunt him. On becoming aware of this, Trueman arranged two testimonial dinners for his new-ball partner.

Statham passed away from leukaemia just before his 70th birthday.