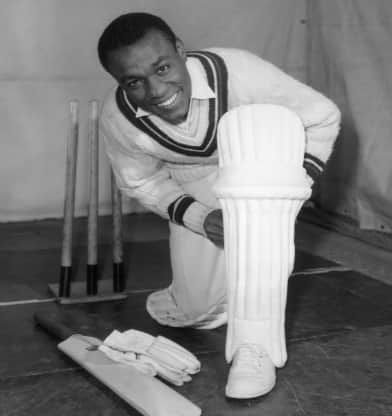 Conrad Hunte was, without a doubt, one of the greatest West Indian openers. He averaged in excess of 45, and scored more runs than any Test opener during the period he played — and he did that despite having 13 opening partners in his career. His fourth-innings average of 61 is perhaps a more telling statistic.
An orthodox batsman in the classical mould, Hunte could explode at will, and was the perfect mix of elegance and power. He sacrificed the cut from his repertoire to minimise risk, but retained his imperious on-drive and brutal hook. Eye-witnesses often compared him to George Challenor.
People celebrate Garry Sobers’ 365*, but Hunte’s 260 in the same innings is barely recalled. The pair added 446 before Hunte was run out. He was appointed vice-captain for the famous 1960-61 tour of Australia. He scored 110 (in a team score of 233) at Melbourne, but is remembered more for the throw from deep mid-wicket to run out Wally Grout in the tied Test at Brisbane.
Hunte scored 471 runs at 59 in England in 1963 including hundreds at Old Trafford and The Oval, and 550 more at 61 against Australia back home. Though he did not score a hundred in the latter, he topped both the runs and averages chart from either side.
A riot broke out at Eden Gardens on New Year’s Day, 1967. Fans set the stadium on fire. Hunte braved the flames to rescue the West Indian flag. Though a local policeman retrieved both flags, a rumour spread that Hunte had done it himself. In typical Hunte fashion, he revealed the truth in his autobiography.
An exceptional orator and a devout Christian, Hunte tried to spread the message of absolute honesty, purity, sanctity, and love in the dressing-room, but his teammates responded by making fun of him.
So he decided to spread his philosophy outside the team. He volunteered for Moral Re-Amendment (MRA) — an organisation created with the sole purpose of building up ethical values in the society — and eventually gave up cricket to work for them.
When sport returned to South Africa in the post-Apartheid era, Hunte met Ali Bacher, offering to serve South African cricket. He spread cricket among indigenous Africans in the country, promoting interracial bonding. He also managed the South African Women’s team.
Funded by both ICC and MCC, Hunte worked as a National Development coach for seven years. He spread cricket in several nations, including the volatile Uganda. He played a major role in raising standards of African cricket since 1990.
And all this was selfless, too. “I’ve never met a better person. I have never heard him speak ill of anyone,” admitted Bacher.
Hunte became Barbadian Consul in Atlanta, and worked as Consultant in the Barbadian Ministry of Youth and Culture. In 1998 he was made a Knight of St Andrew (KA) of the Order of Barbados, and was elected President of Barbados Cricket Association in 1999.
A month later he was one of the pall-bearers of Malcolm Marshall. Less than a month after that he passed away from a heart-attack while playing tennis in Sydney, where he was to deliver a speech at an MRA conference. He was 67.
Abhishek Mukherjee