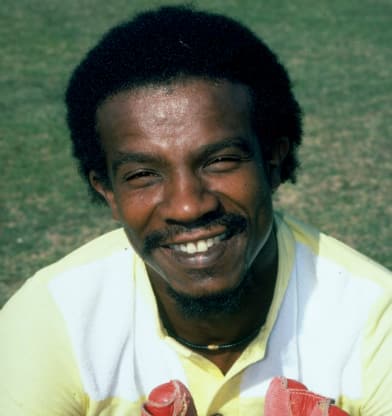 David Murray was the perfect example of tremendous potential getting overshadowed by lack of commitment and dedication.
Indeed, Murray was an excellent wicketkeeper. He had everything it takes: a low centre of gravity; nimble feet; and a great sense of anticipation. Some called him greater than Deryck Murray, or even Jeff Dujon. Michael Holding hailed him as one of the finest to have kept wickets to him.
Murray had 62 victims, and added 601 runs at 21.46 for good measure. At First-Class level the numbers read 4,503 at 31 and 323 dismissals.
He started as a backup for Deryck Murray, and went to England in 1973. He kept well in England as well as in the tour matches in India, but a recall never happened.
He kept getting the runs. The talent ran in the genes, for Murray is a son of Everton Weekes.
Unfortunately, he got himself into marijuana addiction, and at times even smoked pot before and after a day’s cricket. Subsequent updates revealed that he had taken to smoking in his pre-teens.
His real resurgence came when Deryck Murray joined Kerry Packer’s bandwagon. Unfortunately, he toured India soon afterwards, and his drug symptoms relapsed. It is believed that he had already become a cocaine addict by then.
When Dujon arrived, the selectors decided to persist with Murray, including Dujon as a specialist batsman. On the 1979-80 tour he set a new West Indian record, with 7 catches in a Test innings.
In 1983 he left for South Africa as part of two rebel tours. Murray scored 347 runs at 22 to go with his 38 dismissals, and was paid $120,000.
Unfortunately, the entire squad faced bans from the board back home.
Unfortunately, Murray could not handle the situation. He ran into poverty, remains a drug-addict, lives under destitute circumstances, and has lost so much weight that it is not easy to distinguish between his skin and bones anymore.
His son Ricky Hoyte has kept wickets for Barbados.
Abhishek Mukherjee