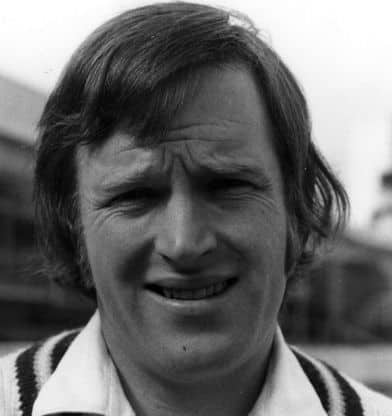 Amiss is definitely one of the greatest opening batsmen produced by England, a country that has produced plenty of them. He has an average next to only Herbert Sutcliffe, Len Hutton and Jack Hobbs as an opener for England among those who have scored over 2,000 runs in that capacity. If we turn the focus on world cricket, we find only two more men ahead of him in this category, Bruce Mitchell of South Africa and Bobby Simpson of Australia. Yes, as an opener Amiss outdoes his illustrious partner Geoff Boycott as well as many other vaunted names, including the Essex pair of Graham Gooch and Alastair Cook.

Yet, as an English opener, he is hardly ever mentioned in the same breath as Hobbs, Hutton, Sutcliffe and Boycott. The reason for this is an average of 13.16 in The Ashes, where he started with a pair in 1968 and then Denis Lillee and Jeff Thomson blasted him out in innings after innings.

Yet, he had no problems in playing the most furious pace. He plundered runs against West Indies, scoring 1,130 against them in 10 Tests at 70.62, enjoying himself in the islands with 663 runs from 5 at 82.87. However, when asked about his two double-hundreds and immense success against the Caribbean bowlers, he modestly says it was the work of those flat wickets one got those days in those islands. What he omits to say is that he scored 203 at The Oval when Michael Holding took those 14 wickets in 1976.

A Kerry Packer recruit, his Test career ended in 1977, but Amiss carried on playing with the aid of the new innovation of the helmet and remained a pillar for Warwickshire. He scored his 100th century in the mid-1980s and his First-Class career lasted till 1987.

Statistically once Amiss had scored 40, he was the most difficult batsman of his generation to be dismissed. Given his generation included men like Glenn Turner, Geoff Boycott, Sunil Gavaskar and others, that is saying something. Of Amiss’ 11 Test hundreds, 8 exceeded 150, a higher rate even than that of Don Bradman.

What goes unnoticed quite often is that Amiss was one of the first great batsmen in ODIs. He had an average of 47.72 and a strike rate of 72.48, with 4 hundreds in 18 matches, in the infancy of the format. He was also the first to score an ODI hundred.