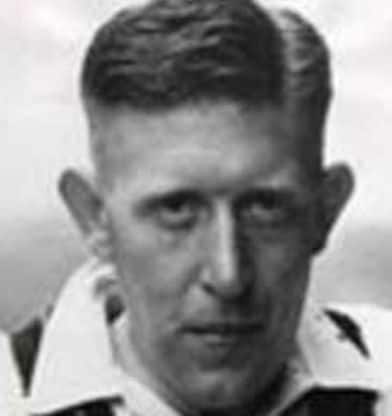 A fast-medium bowler who could move the ball both ways, Pollard had established himself in the Lancashire side when The War ground the cricket to a halt. He had taken 149 wickets in 1938 and had followed it up with 111 in 1939, making it five summers in a row that he had more than 100. At 27, he could have broken through into the England side.

However, by the time The War ended and cricket restarted, Pollard was 34. He could still move the ball both ways, in the air and off the wicket, and had great accuracy, but the years had passed.

A superb performance in the Gentlemen-Players encounter at Lord’s in 1946 paved the way for a Test debut against India. At Old Trafford he bowled first-change after the illustrious duo of an ageing Bill Voce and a maturing Alec Bedser. It was Pollard who provided the breakthrough, flattening the stumps of Mushtaq Ali with the score at 124. He went on to take the first four wickets in quick succession, five in all, all top-order batsmen, all renowned names. Mushtaq was followed to the pavilion by Abdul Hafeez Kardar, Vinoo Mankad, Vijay Merchant … and finally The Nawab of Pataudi. India were all out for 170.

Of course, Tests against India and other non-Australian nations were treated as experiments by England. In the third Test Alf Gover partnered Bedser with Bill Edrich taking on the role of the third seamer. Pollard went to Australia, dismissed Don Bradman when playing South Australia. However, in the Tests, Bedser was partnered by Voce or Edrich. Pollard played one Test in New Zealand, the farewell match of Wally Hammond, and it was off his bowling that the great slip fielder snapped up his 110th and final catch. Pollard took 3 for 73.

Back home, he was overlooked in the series against South Africa but was pushed into action against The Invincibles. Bowling at Old Trafford, he opened with Bedser, and trapped Bradman leg before for 7. He went on to dismiss Keith Miller and Sam Loxton. In the second innings, as the match dwindled to a draw, he bowled 10 overs for just 6. In the same Test he played a full-blooded shot that felled Sid Barnes, who was fielding on the edge of the pitch.

Next came Headingley. England piled 496, and then Bedser got Arthur Morris for 6. Pollard ran in to dismiss Lindsay Hassett, and then knocked over the stump of Bradman. However, that was his last Test wicket.

Neil Harvey and Miller, and then Loxton, got after him and the first-innings efforts showed 2 for 104. In the fourth innings Australia needed 404 and got them. Pollard finished with none for 55. The Oval saw Allan Watkins partnering Bedser.

Pollard’s 15 Test wickets in 4 Tests had cost just 25.20 apiece, and that too skewed by the last bit of bad stretch. However, he did not play for England again.

After that age caught up and his wickets in the county games became less frequent and more expensive. He retired at the end of the 1950 season, having taken 1,122 wickets at 22.56 apiece.