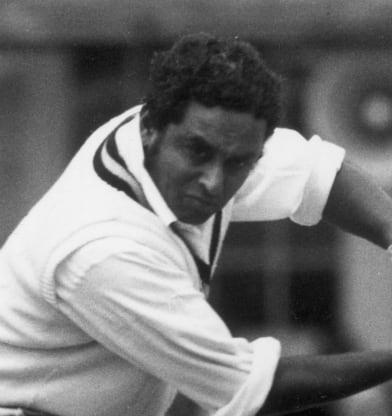 A sound, steady batsman at the top of the order, Dilip Sardesai, the first Goan to play Test cricket for India, had often looked dependable for the first ten years of his career without really making his mark as a genuinely good batsman.
All that changed during the 1970-71 tour of West Indies when he pulled India out of the woods with his double-hundred in the first Test and continued to score big throughout the series. Remembered for India’s win and Sunil Gavaskar’s 774 runs, one tends to forget that Sardesai scored 642 at over 80 with 3 centuries.
The match saving double-hundred, incidentally, had not been his first such effort. He had done the same against New Zealand at the Brabourne Stadium in 1965.
That summer, he played two decisive knocks of 54 and 40 in India’s first ever win in England. Thus this unassuming man had a major role to play in the two defining victories in Indian cricket.
And surprisingly, after that Oval Test, he played just one more. It was at home against England. A brilliant peak and then he just disappeared from the scene.
It was a strange career, but a vital one in the context of Indian cricket.
Arunabha Sengupta