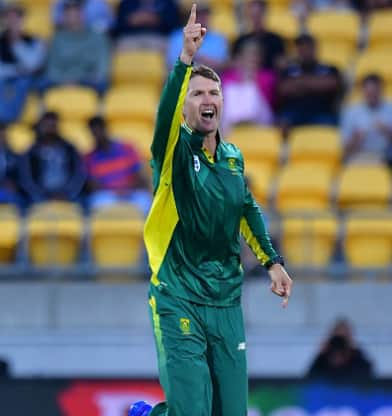 Born March 29, 1989, Dwaine Pretorius is a lanky all rounder from South Africa, who was the part of the country's Under-19 team in 2008. Eight years on, he made his national debut in ODIs against Ireland. Despite being part of the U-19 side, Pretorius could not make it to ICC Under-19 World Cup 2008 because he broke cartilage in right knee. Pretorius then moved from cricket and focused on studies instead.
However, after three years, he came back to the sport after earning an accounting degree. Pretorius began his second innings joining North-West provincial side in 2010-11 season and soon became regular member of the side. His consistent performance with both bat and ball earned him T20 Amateur Cricketer of the Year for 2011 and then got the chance to play for Highveld Lions in Champions League T20 of 2012 edition.
Injuries kept haunting him and this time he had to undergo a knee surgery. His pace dropped on return. From being 140s kph, it dropped into the 130s and he shifted focus on accuracy. In 2014-15 season, Pretorius got a franchise contract call and earned another award in his bag as he was named the South African Cricketer's Association MVP in 2015. In 2016, he toured Australia as a part of South Africa A side for a quadrangular series and soon received the national call.
Pretorius made his ODI debut against Ireland at Benoni, bowled five overs and scalped the wicket of Gary Wilson with conceding 19 runs only. Having the advantage of height, Pretorius generates some serious bounce of the pitch.
He was then picked for an ODI series against Australia, in which he played a crucial role with bat by contributing 15 off 20, including a six in the mammoth chase of 372. He was included in XI in place of inured Wayne Parnell. He was also part of South African squad for Test series in Australia in place of injured Dale Steyn after some impressive all-round performances in First-Class cricket.
Abhishek Kumar