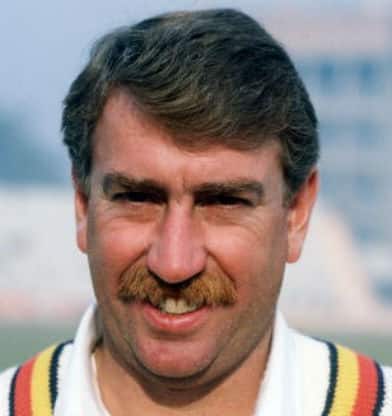 Hemmings is remembered for all the wrong reasons.

He is remembered because of Kapil Dev plonking his foot down the wicket and slamming him for four consecutive sixes at Lord’s, each straighter than the next, getting the 24 required runs to save the follow-on.

He is remembered because of his debut, when the piglet was smuggled through the pickets and released into the outfield, one of its flanks bearing the name of Ian Botham, the other printed with the word ‘Eddie’ … hinting at the not-so-lithe frames of the two men.

Then there was the moment when he just waited, ball in hand, at Faisalabad, captain Mike Gatting brought David Capel up from deep square-leg to prevent a single, and what followed rippled into a major diplomatic incident, with the England skipper and umpire Shakoor Rana all but coming to blows.

There was also the moment when he dropped a 17-year-old Sachin Tendulkar off his own bowling at Old Trafford, and the Little Master went on to score the first of his 51 Test hundreds.

A year before that he had been captured on the television aiming a frustrated kick at one of the jubilant spectators who had run into the ground to celebrate Chetan Sharma’s hundred at Kanpur.

Those who followed the English tours of the era closely enough may also remember his not-too-shapely frame looking quite fetching under a milkmaid’s smock.

However, a Test bowling average of 42.44 for his 43 wickets notwithstanding, there was plenty of other excellent feats to remember Eddie Hemmings by.

As a night-watchman at Sydney during his first Australian tour, Hemmings battled against Geoff Lawson, Rodney Hogg and Jeff Thomson to score 95 before being out to a dodgy decision off Bruce Yardley. It will not be stretching facts to say that he saved the Test for England.

A vital cog of the World Cup outfit of 1987, Hemmings performed the dual role of picking up wickets and restricting the scoring all through the tournament. The blazing moment was in the semi-final when he induced Kapil to play a fatal slog-sweep with the match practically in India’s pocket. He finished with 4 for 52.

Two years later, at the age of 40, he walked out to bat for Nottinghamshire against Essex at Lord’s and struck the last ball for four to bring off a remarkable victory.

The following summer, at Edgbaston, he obtained his only five-wicket haul in Tests.

It is also forgotten that in the second innings of the Lord’s Test against India, Kapil tried to get after him again. Hemmings had him caught at deep mid-wicket for 7 — not for the first time had he got the batsman caught in that position. He also dashed Dilip Vengsarkar’s dreams of getting a fourth century at Lord’s.

Playing for an International XI against a West Indies XI at Sabina Park in 1982-83, he finished with innings figures of 10 for 175. While these remain the most expensive First-Class ten-wicket haul, they are also the best bowling figures on West Indian soil.

He ended with 1,515 wickets in 518 matches at 29.30. As a lower-order batsman, he had a decent enough record of 9,533 runs at 18.54 with a hundred and 18 fifties. He could have scored more but for his perennial casual approach to batting and the tendency to be overly aggressive.

His sons James and Thomas played in the Minor County matches. However, a more successful cricketer was niece Beth Morgan, the medium-paced bowling all-rounder, who played 7 Tests and 72 ODIs for England Women.