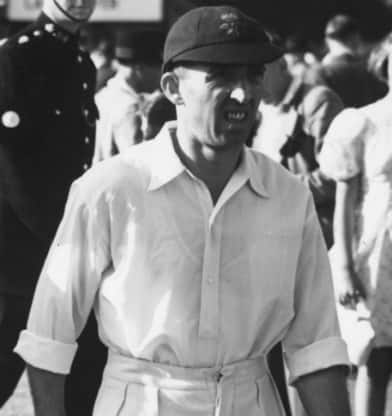 With 59.23, Eddie Paynter has the fifth-highest Test batting average in history. What is more, his Ashes average of 84.43 has been bettered only by Don Bradman.

Had he not done anything else, Paynter would still have immortalised himself with the Brisbane Test in the Bodyline series. Fielding in the searing heat under the brutal Brisbane sun, Paynter ran a temperature of 102°F by evening, had to be hospitalised with tonsillitis, and was advised bed rest. He still snuck out, putting his life at stake, reached The Gabba, and batted. He returned to the hospital and resumed next morning with tablets and gargle mixture in his pockets. He scored 83, giving England a 16-run lead. When the English top-order crawled in pursuit of 160 in the fourth innings, Paynter walked out and finished things off with two sixes.

The next day Paynter’s name was mentioned in the House of Commons, to great applause.

But Paynter was merely a grafter. Never afraid to play his strokes, Paynter was an extremely hard cutter and puller. He was particularly brilliant against spin, stepping out as well as sweeping with panache. He was also excellent in the outfield, and even kept wickets at Test level.

And he did all this after losing the ends of two fingers at 18 in a factory accident.

Paynter was a late bloomer. He scored his first hundred at 30, got a second one immediately, and was summoned out of nowhere to play a Test. In a Roses match soon afterwards, he thrashed the Yorkshire bowlers around to score 152, and followed it with 138 against Kent.

The floodgates opened after the Bodyline series, and Paynter improved on his aggregate with every season, going past even the 2,000-run mark in 1936. Unfortunately, he was still not considered for the 1934 Ashes.

He was in such good form in 1937 that he had to be recalled. Later that season he smashed 322 in five hours against Sussex. That season he scored 2,904. His Championship tally of 2,626 in a season remains the second-best in Lancashire history, only 7 behind Johnny Tyldesley’s 1901 tally.

He passed away in 1979, at 77. His great-grandson David played for Northamptonshire.