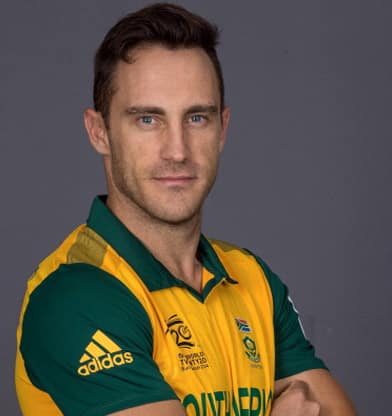 Though he had made his limited-overs debut in 2011, Faf du Plessis really came to prominence with an outstanding start to his Test career, against Australia in 2012-13. He scored 78 and 110* on debut at Adelaide, the second-innings lasting a marathon 466 minutes. In his next Test, at Perth, du Plessis scored 78* to lift South Africa from 75 for 6 to 225, helping set up a massive victory. With time his numbers looked human. While he has got hundreds at regular intervals, the average has settled down in the mid-40s.
In between all that, he was appointed South Africa’s T20I captain when they announced separate captains for all three formats. He was also appointed Test captain when Hashim Amla and du Plessis’ childhood friend AB de Villiers both quit the post in 2016.
Perhaps his most iconic innings came at Adelaide, in 2016-17. He was hounded by the Australian media and booed by the crowd after being accused of ball-tampering in the previous Test at Hobart. Du Plessis responded with a delightful 118*, becoming the first captain to register a hundred in a day-night Test.
Before the Test series du Plessis had led South Africa to a 5-0 ODI whitewash over Australia at home. In that series he scored 111 at Johannesburg, becoming the first to score hundreds in all three international formats on the same ground. Later that summer he scored 185 against Sri Lanka, at that point the highest ODI score by a South African against a Test-playing nation.
He also bowls leg-breaks, and in 2012 became the first bowler in history to take five-wicket hauls in consecutive innings — 5 for 19 against Easterns and 5 for 28 against Lions.
One of those roving T20 cricketers, du Plessis has played for Lancashire, Melbourne Renegades, Chennai Super Kings, and Rising Pune Supergiants (later Supergiant) as well as Titans and Northerns at home. However, when Nottinghamshire had offered a 21-year-old du Plessis a Kolpak deal he had turned it down.
An enthusiastic cook, du Plessis is also an Instagram celebrity due to his somewhat interesting shares.