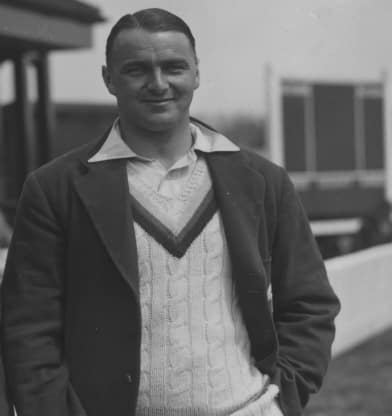 Smailes was one of the pillars of Yorkshire during the period of their eight Championship triumphs in 10 years.
A versatile performer, he opened the attack with Bill Bowes, swinging the ball at medium-pace. If the pitch was affected by rain, he could switch to off-spin.
Sometimes, his left-handed batting could be really dangerous. He hit 3 First-Class hundreds, 2 of them in 1938 when he scored over a thousand runs in the summer. It was also the fourth season in a saga of five that he took over 100 wickets. He had missed the landmark in 1935, getting 96.
Playing second fiddle to Bowes and Hedley Verity, Smailes was nevertheless good enough to knock on the doors of Test cricket often. In 1938, during that dream season, he was included in the Test side. This was after his 10 for 137 had brought Australia to their knees against Yorkshire, and the tourists would have lost the match but for the rain. Rain had an even more definite say in Smailes’ career, when what was supposed to have been his Test debut at Old Trafford was washed out without a ball being bowled.
In 1939, he captured all 10 for 47 against Derbyshire. And then came The War.
He was 36 when cricket restarted, but Smailes persevered. England was depleted in every department, especially pace. And Smailes was tried out at Lord’s against India. On Test debut, he scored 25 from No. 8 and took 3 for 44 in India’s second innings. But that remained his only Test appearance.
In the three seasons that he played after the War, Smailes often led Yorkshire when Norman Yardley was unavailable. He retired with 822 wickets and 5,892 runs under his belt.
Arunabha Sengupta