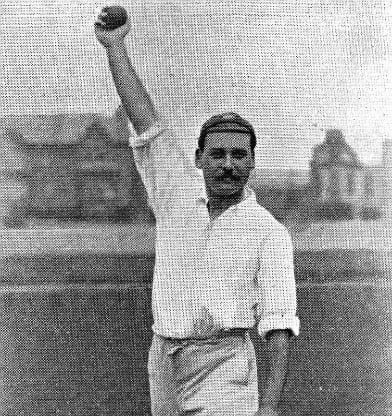 It is the eternal misfortune of Fred Tate to be remembered for the crucial dropped catch in the only Test he played. Tate, who never fielded in the deep, was pushed back to the deep mid-wicket as the field changed over for the left-handed Australian captain Joe Darling. The top-edged pull off Len Braund’s leg-spin went swirling in the air, and Tate made a horrible hash of it.
To add to the misfortune, he came in to bat in the final innings with eight required for victory, edged the first ball for four and was bowled off the next. Australia went on to win the Old Trafford Test by 3 runs.
Tate, an excellent off-break bowler who delivered at brisk pace, enjoyed a long First-Class career for Sussex, taking 1,331 First-Class wickets at 21.55. In 1902 alone he took 153 of these, at 14.28. Sussex reached the second spot for the first time in history that season. He routed Middlesex for 51 and 79 — inside a single day — and finished with 15 for 68 in the match.
However, he continues to be remembered as the man who messed England’s chances in that famous 1902 Test.
Tate later coached Derbyshire, and subsequently ran a pub. No one can be quite sure whether, after the dismal Test appearance, Tate did say, “I have a son growing up at home who will win the Ashes.”
His son Maurice did grow up to become one of the greatest bowlers of Sussex and England. Maurice’s brother Cecil played for Derbyshire and Warwickshire.
Fred Tate died in 1943.
Arunabha Sengupta