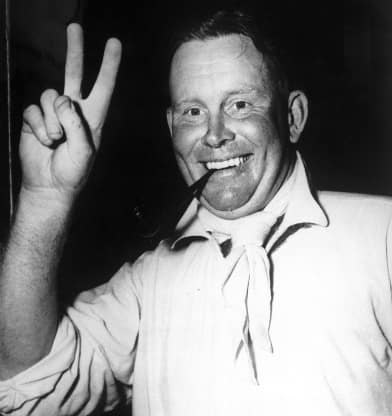 Variously known as amiable and likeable, as well as rude, ruthless and a martinet, Freddie Brown enjoyed a Test career spanning 22 years.
An amateur cricketer, who was perhaps less than the best of England, he nevertheless batted with panache and bowled both medium-pace and leg-breaks with success. His figures with the bat and ball in Tests are not outstanding, but they do underline his utility.
Born in Lima, Peru (Ashok Gandotra, born in Rio, is the only other Test cricketer born in South America), Brown had a good start to his career. Unfortunately his career went steadily downhill after the first few years.
However, after the Second World War, he was one of the sizable numbers of cricketers who continued their careers after the atrocities, and was named captain of Northamptonshire. Later, when England played New Zealand in 1949, he was named captain of the national side.
The Tests against New Zealand were drawn. After that, Brown took the Englishmen on their Ashes campaign in 1950-51 with disastrous results. One of the major bloomers he made was to demote Len Hutton to No. 6 to strengthen the lower order. Brian Close, on his first tour as an 18-year-old, later criticised his thoroughly unsympathetic approach.
Finally, Brown led England to a 3-1 victory against the visiting South Africans in 1951.
By 1953, when the Australians came over, Brown was in his last season and a member of the selection committee. He was thus part of the decision makers who recalled him for a couple of Tests. The English players still called him ‘Skipper’ out of sheer habit, although by now Hutton was leading the side.
Brown later acted as manager on overseas tours, although not always a very popular one. In the 1958-59 tour he managed the disastrous Australian tour, and fell out with Jim Laker. It would not be a stretch to say that Laker’s brilliant career ended was truncated because of Brown's bull-headed management tactics.
Later he acted as President of MCC.
Arunabha Sengupta