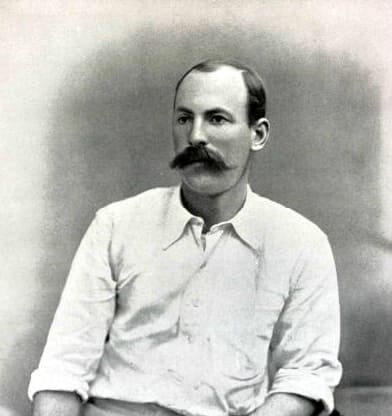 Fred ‘Nutty’ Martin bowled for years, mostly for Kent. A left-arm medium-paced spinner who thrived on accuracy, his First-Class wickets amounted to 1,317 at 17.38.
However, Martin played only 2 Tests for England. At The Oval, in 1890, on his debut, he picked 12 wickets, 6 in each innings. George Lohmann took 3 both times. And together they managed to upstage the fearsome duo of Charlie Turner and JJ Ferris, as England beat Australia by the wafer-thin margin of 2 wickets.
It remained the best figures on Test debut for more than eight decades before Bob Massie went past him with 16 for 137 in 1972.
Strangely, he played just one more Test, in 1892 when WW Read’s team toured South Africa. Thus he finished his Test career with 14 wickets at an average of 10.07 apiece. With a 10-wicket cut-off Martin’s average is the second-best in history.
That year he was named one of Wisden’s five cricketers of the year after he had three consecutive outstanding seasons, in each of which he got more than a hundred wickets at less than 14 apiece. In 1891 alone he had 19 five-wicket hauls, and 14 more in 1892.
He played for Kent till 1899 before he was replaced by the great Colin Blythe.
‘Nutty’ Martin died in 1921. He was 60.
Arunabha Sengupta