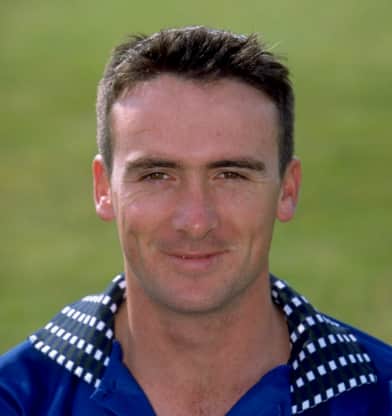 Gavin Hamilton represented his birth nation Scotland in the 1999 World Cup, but only after it was made sure that England would not be requiring his services. He scored 217 runs in 5 games, proving a mainstay of the side, and took 3 wickets with his medium-paced bowling.
However, when England toured South Africa in 1999-00, Hamilton was selected for the national side. It ended in a nightmare, though. In his only Test, on a green-top in Johannesburg, Hamilton bagged a pair and ended with figures of none for 63. He did not take a catch, either. He never again played for England, though it was deemed slightly unlucky that he got just one chance.
The appearance for England meant he would have to re-qualify for Scotland. He spent the time playing for Yorkshire, and later Durham. Back in the Scottish team from 2006, he represented them till 2010, leading them since 2009. He was a part of their side in the 2007 World Cup, and led them in the 2009 World T20.
For Yorkshire, Hamilton was a sterling all-rounder, scoring 2,228 runs and capturing 222 wickets. His ODI batting record also reads extremely impressive. His First-Class averages (26.24 with bat, 25.76 with ball) make decent reading as well.
He has also been playing in the Bradford League for numerous sides since 2009.
Arunabha Sengupta