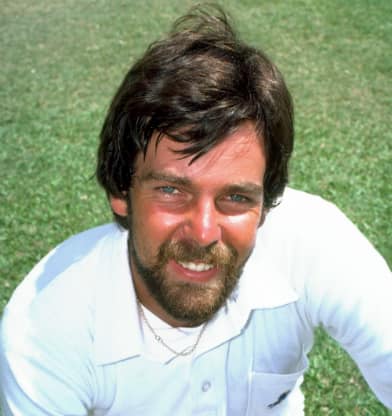 Miller’s greatest achievement was the 1978-79 series against the Packer-hit Australians, when his off-breaks claimed 23 wickets at 15.04 (he also scored 234 runs at 23.40). However, his bowling was accurate rather than incisive and he seldom achieved the same amount of success in the rest of his career.
Curiously, even other than the series against a depleted Australia, his numbers Down Under were really decent. Given that most finger-spinners have struggled in the southern land down the eras, this was some achievement.
Despite less than brilliant feats in the rest of his career, Miller was often chosen ahead of his illustrious contemporaries John Emburey and Eddie Hemmings. That was due to his more than useful batting which was both technically correct and of a quality good enough to brand him an all-rounder.
His other claim to fame was the catch of Jeff Thomson to end the Melbourne nail-biter of 1982-83; after the ball ricocheted off Chris Tavare at second slip, Miller, standing at first slip, ran behind Tavare to pouch it. England won the Test by 3 runs.
Miller narrowly missed Test centuries thrice, scoring 98* at Lahore, 98 against India at Manchester and 89 at Christchurch. However, he still took 380 innings to get his maiden First-Class century, as late as in 1984.
After retirement, Miller was in a lot of demand as an after-dinner speaker because of his excellent wit. In 2000 he became a member of the English selection panel.
A droll character, he was much in demand in retirement as an after-dinner speaker, and joined the England selection panel in 2000. Eight years later, he usurped David Graveney as England's National Selector — a post Graveney had held for eleven years.
Arunabha Sengupta