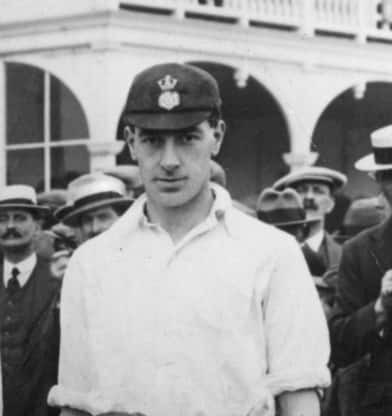 Brown was one of the most colourful of cricketers. On the field of play he was an aggressive left-handed batsman who drove and hooked the fearsome Jack Gregory and Ted McDonald with plenty of assurance and power. He averaged 50 in that series of 1921 otherwise disastrous for England. It was remarkable that he was not the regular wicketkeeper for his county, Hampshire, but kept wickets for England in all his 7 Tests. Yet, his glovework was deemed to be world-class.
A Hampshire cult hero, he played 26 seasons for the county, ending at the age of 46, carrying his bat with 150 against Surrey on a difficult Oval wicket in his last season.
For someone who played as a batsman-wicketkeeper for England, Brown was a rather handy fast bowler in his younger days. When Hampshire beat the Australians in 1912, he captured 3 wickets in the first innings and 2 in the second. He fielded superbly at mid-off, effecting spectacular run outs. There are reports of his catching Jack Hobbs off a hard drive at silly-point, an effort Wisden called ‘marvellous’. And as a batsman he was spurred by tough situations. When Warwickshire bowled Hampshire out for 15, and had them six down with 31 to score to avoid innings defeat, it was Brown who scored 172, leading a recovery like no other, and ultimately Hampshire triumphed by 155 runs.
Among the many anecdotes about the man, there is the one about his disagreeing with captain Lionel Tennyson, walking in to bat at No. 10 against Warwickshire with a ruined relic of a bat, receiving a bouncer as the first ball from Harry Howell, and turning around to hit it over the wicketkeeper for six. After a few moments another powerful stroke split the blade. Tearing off one part, Brown handed it over to the umpire and carried on batting undeterred with what remained in his hand.
Arunabha Sengupta