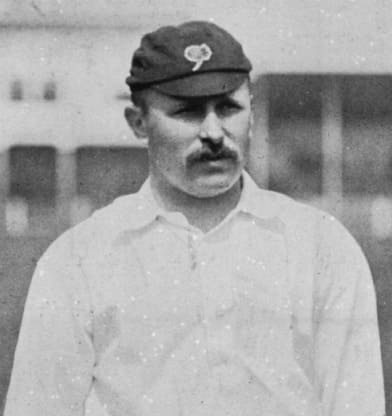 As an anonymous author once said, “There were great cricketers before, there are great cricketers now, and, happily, there will be great cricketers again. But in the history of the game George Herbert Hirst will always hold his own place, a romantic but essentially robust figure. A noble game is the nobler because he played it, and to every lad he taught, to every man who knew him, from Kirkheaton to Melbourne, from Sydney to Lord’s, he will ever remain the revered master and the living inspiration.”

At the height of his most brilliant year in 1906 he played Somerset in Bath and scored 111 and 117 not out while taking 6 for 70 and 5 for 45. After that he merely mentioned he could do with a good night’s sleep. And then there was that game against Essex in 1901, when Yorkshire scored 104 and still won by an innings and 33 runs. Hirst’s figures were 7 for 12 and 5 for 17. When biographer AA Thomson asked him about that landmark match years later, Hirst pulled a face and exclaimed, “Ah, you should have seen my figures in that (1901) Somerset match — 1 for 189.”

In 1906 he achieved the feat of twice a double of capturing 200 wickets while scoring 2,000 runs. Each feat in isolation was a specialist’s dream. Few batsmen ever crossed the 2,000-barrier, and it was rare for a bowler to get 200, and then too it normally remained the realm of the slow, easy-paced, energy-preserving ones. And here was Hirst, a powerful forcing batsman and a fast bowler with a bounding run and full swinging arm who put every ounce of strength in each delivery. Bob Appleyard took 200 wickets for Yorkshire in 1951 with his fast off-breaks, but he scored only 104 runs. “I was absolutely jiggered after what I’d done. How he had the energy to bat as well I can’t imagine,” he recalled.

As a batsman Hirst was solid and hard-hitting with remarkable cross batted strokes. As a left-arm bowler, he was the pioneer ofswerving the ball in the air. This was almost as revolutionary as the googly that BJT Bosanquet was to use three years later.

Hirst himself remained characteristically modest about his discovery, saying: “Sometimes it works, sometimes it doesn’t.” He was being honest as well. He knew he could not use the skill throughout the innings, but while it lasted even the most gifted batsmen were reduced to impotence. With a head-wind blowing, the unnatural behaviour of the ball was bewildering. Sammy Woods was aghast when he wondered: “How the devil can you play a ball that comes at you like a hard throw from cover-point?”

For seventeen years after his retirement, Hirst coached Eton College and Yorkshire Club. Not one eager young cricketer left his hands without gaining something. Hedley Verity, Bill Bowes and Len Hutton were just three of those who worked with him and went ahead to conquer the world.

Bowes described him as “the finest coach in the world”. Len Hutton wrote: “I shall always think of George Hirst as the ideal coach. He was a ‘natural’ one, the guide, the philosopher, and friend of every young fellow who has had a trial under him.”