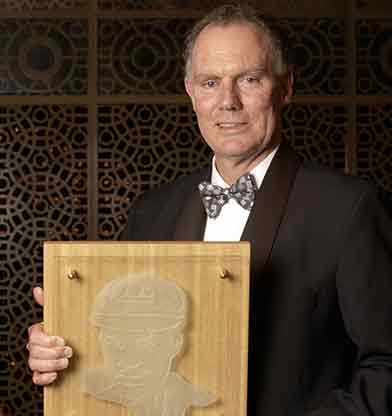 Greg Chappell was a visual delight when in full flow, a graceful, elegant batsman, the toughest of competitors and one of the more combative and controversial characters of the game, perhaps the greatest Australian batsman after Don Bradman.

The Don himself, not always enjoying the best of terms with the younger man, rejoiced when Greg Chappell went past his aggregate and became the first Australian to score 7,000 Test runs: “He is a worthy holder of the honour, because for many years he has been Australia’s premier batsman and his runs were made with an aesthetic imperious quality which few others in history could emulate.”

The tall, graceful Chappell was a picture of sublime aesthetics sculpted on the solid foundation of orthodox perfection of methods. His on-drive was the classiest sight in cricket, and even when he played the hook, a stroke normally associated with ferocity and force, he laced it with a touch of artistic elegance.

Yet, his game was not without perils of anxiety and self-doubt of a private person. He remained fighting to find a balance between his roles as a batsman, captain, husband, father and businessman, crowded schedules and unsympathetic administrators. Sometimes these led to loss of concentration and form, and opting out of tours. At least once it led to a bizarre, deplorable and often condemned decision. But, seldom did his career graph trace anything but the most glorious peaks of high. And till his last day, even as plenty of fans criticised many aspects of his approach and sportsmanship, no one could deny that Greg Chappell in full flow was a joy to behold, one of the best sights in cricket.

In the words of Frank Tyson: “Greg Chappell was the Hamlet of the game: he brooded, like the gloomy Dane, about the responsibilities that often weighed heavily on his bat and shoulders, and though he never doubted that he was born to command, he seemed at times assailed by inner anxieties and doubts.”

Chappell’s final figures read 7,110 runs from 87 Tests at 53.86 with 24 hundreds. His medium-pacers, and sometimes spin of both varieties when the wicket demanded, got him 47 Test wickets at 40.70. He was not really very keen on playing too many ODIs during his career, but nevertheless turned out in 74 of them and scored 2,331 runs at 40.18 at a strike rate of 75.70, while capturing 72 wickets at 29.12. The figures are more than respectable even in the context of current day cricket.

Controversies plagued him throughout his career, and beyond; whether it was the “scripted” nine slips during the Centenary Tests or asking brother Trevor to bowl underarm in an ODI when New Zealand needed seven to win off the last ball or a turbulent coaching phase with India, Chappell was never short of media attention, and took his fair share of flak.

As captain, he led his team to some memorable triumphs against West Indies and England while being a major figure in the player rebellion that led to the Packer Cricus and ultimately resulted in increased pay for the cricketers. During the World Series Cricket, against the biggest assembly of quality fast bowlers, Chappell played some of his best innings which have not been given First-Class status. Along with Viv Richards and Barry Richards, he was definitely the best of his era.