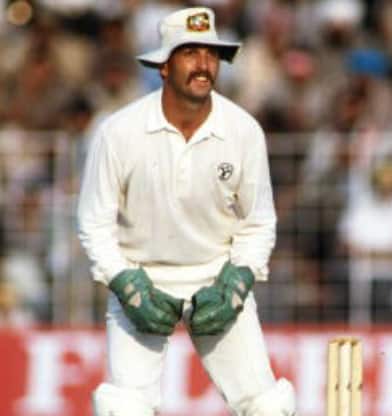 Cricket will remember Greg Dyer for two reasons: first, he was the wicketkeeper of the Australian side that won the 1987 World Cup; and his career ended after he claimed a fraudulent catch in a Test match. He had an ordinary career otherwise, playing 6 Tests and 23 ODIs, hitting the ball as hard as possible and keeping wickets acrobatically.

Dyer was one of the several wicketkeepers Australia tried out between Rod Marsh and Ian Healy. The member of a New South Wales side that won consecutive Sheffield Shield titles, Dyer beat Wayne Phillips, Tim Zoehrer, and Steve Rixon to the World Cup squad.

He did a good job behind the stumps, and his catch to dismiss a reverse-sweeping Mike Gatting off Allan Border in the final remains one of the most lingering memories of the tournament.

Unfortunately, the Adelaide Test also hastened the end of his career. When Andrew Jones leg-glanced Craig McDermott, Dyer tumbled and came up with the ball; the umpires ruled Jones out after a discussion. Sadly, television cameras clearly revealed that the ball had dropped on the ground before Dyer had scooped it up.

The incident ruined Dyer’s reputation severely. A month after emerging as a World Cup hero Dyer found himself in and out of the side. He played his last international match a mere three months after the World Cup final. It did not help that the extraordinarily talented Healy was fast-tracked into the side after only 6 First-Class matches.

He later moved into the corporate sector, holding key positions in organisations across three continents. In 2011 he was appointed President of the Australia Cricketers’ Association.