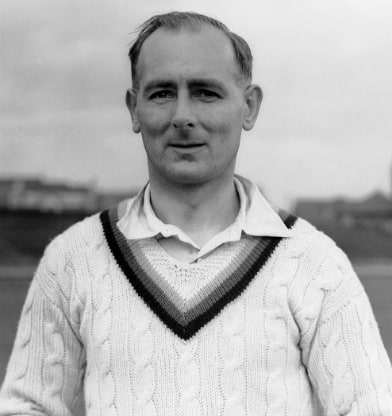 “I think I knew all about Clarrie (Grimmett), but with Hedley I was never sure. You see, there was no breaking point with him. His whole career exemplified all that was best about cricket.” This was how Don Bradman remembered Hedley Verity. And with good reason. The left-arm spin of the Yorkshire bowler, uncannily accurate at all time and unplayable on wet or turning wickets, accounted for the greatest batsman of the world as many as eight occasions in 16 Tests.

Perhaps the epic duel between the two would have resumed when Test cricket began again after the Second World War. Perhaps there could have been many more added to the tally of 144 shows under the wickets column of his career superb figures.

However, he was called into the Greater Game, turning out for England as a Green Howards officer, in India, Persia and Egypt. And he was killed  in gunfire during a terrifying night in the Sicilian plain in 1943.

Two of those eight Bradman dismissals came in that famed Lord’s Test of 1934 — the crowning glory of a glittering career. Only Johnny Briggs, with 15 wickets at Cape Town against a weak South African line-up of 1888-89, stands ahead of Verity’s 14 scalps in a day of Test cricket.

Verity bowled at near medium-pace. His great ability was to bowl straight and on a perfect length, pitching with unwavering accuracy all through the day. Occasionally a delivery would jump disconcertingly. The most dangerous balls would curve through the air into the batsman, hit the turf and turn away from him. And once in a while, he was not beyond sending an in-swinging yorker. When the wicket was dry and dusty or wet and sticky or crumbling, he bowled slower through the air, tossing it up and turning it a long way. The ball left his hand straight as an arrow. His principle was scientific and simple: “The best length is the shortest you can bowl and still get them playing forward. With slow bowling particularly, you set your field and try to get them driving at you. Then you try to deceive them with flight or a change of pace or spin.”

While the very best fell to his guiles and mastery of the art and craft of spin bowling, Verity’s another great asset was to make short work of the tail. The rabbits were dispatched soon enough to the hutch where they rightfully belonged.

Verity ended with 1956 wickets at 14.90, easily the best bowler of his generation. In Tests, he took 144 wickets in 40 matches at 24 apiece.  This was especially remarkable because it was a decade ruled by batsmen on shirt-front wickets tailor-made for run making.

And then he went into the arena of The Greater Game. In March 1943. He played his last cricket match in Egypt, before leaving for Italy.

It was during the night of July 19, while involved in the Eighth Army’s first attack on the German positions at Catania in Sicily, that Verity was hit in the chest. “Keep going,” was his last command.

Lying wounded on the ground and writhing in agony, he was captured by the enemy. The Germans filled a mortar carrier with hay to take him to their nearest field hospital. He was operated on and a rib was removed, and continued to fight for his life while being transferred across Italy to Naples — a long and arduous journey from hell. In the end it proved too much.