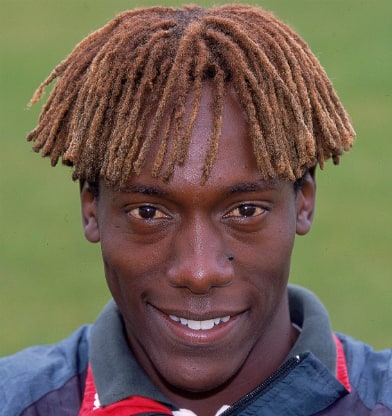 Henry Olonga created several records even before he stepped on to the ground in Test cricket — as replacement for an injured Eddo Brandes: he was Zimbabwe’s first black Test cricketer; at 18 years 212 days he was also their youngest Test cricketer — a record he held for six years; and he was the third Test cricketer to be born in Zambia (after Phil Edmonds and Neal Radford), to a Kenyan father and a Zimbabwean mother.

The debut — against Pakistan at Harare in 1994-95 — was special, for it was Zimbabwe’s first Test victory. Olonga had Saeed Anwar caught-behind in the first innings but did not get a bowl in the second as Zimbabwe romped to an innings win.

He had done more to annoy Indian fans, never more than with his triple-wicket over in the 1999 World Cup over at Grace Road. Less than a year later he scythed through England at Newlands with 6 for 19 and bowling them out for 107.

Olonga was genuinely quick, though his wayward line and injury problems meant that he did not always get desired results. Even then, his 68 Test wickets put him at second place among Zimbabwean pacers (after Heath Streak).

In the Namibia match of the 2003 World Cup, Olonga and Andy Flower decided to don black armbands to “mourn the death of democracy” in Zimbabwe. Olonga was dropped and was specifically asked to not wear black armbands; he responded by donning black wristbands while carrying out his 12th-man duties.

Olonga was charged with treason, and would probably have been executed had he been arrested. However, Zimbabwe qualified for the Super Sixes, which meant that the team moved to South Africa. The team management refused to pay his bills or carry him to the airport in South Africa.

Olonga, however, made it to England. His girlfriend called off their relationship. He also received death threats over email.

On the other hand, MCC granted Honorary Life Membership to both Flower and Olonga in 2003. Olonga continued to play cricket for Lashings XI till 2007.

Olonga is currently a cricket commentator in England. His outspoken autobiography Blood, Sweat and Treason came out in 2010.