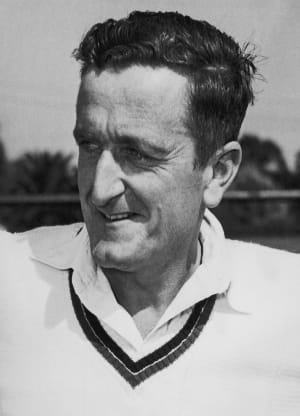 Jack Iverson played only one series, the 1950-51 Ashes, when he was 35. He took 21 wickets from 5 Tests, at 15.23 — and an economy rate of 1.73. His entire First-Class career lasted five seasons, in which he had 157 wickets at under 20. These were spectacular numbers, but there was more to Iverson than that.
Curiously, he never played serious cricket before 31, that too after being inspired by a group of blind men playing cricket in a park. He zoomed to Sheffield Shield, took 46 wickets at 16.60 in his maiden season, and crushed the New Zealanders in a short tour that followed.
He held the ball between his thumb and middle-finger, and could spin the ball either way with just the flick of a thumb — a skill he picked up accidentally while playing with a ping-pong ball. As Gideon Haigh wrote, “what Jack had conceived was a delivery so unusual that it was not even clear what to call it.”
To add to that, those long, extremely strong fingers helped him impart enormous turn. To add to that he bowled quite fast, extracting serious bounce; and his accuracy was phenomenal.
But Iverson remains a cult hero even among mystery spinners. The image of Iverson’s unusual grip is more famous than his face. Some called him ‘The Freak’; others, ‘Wrong-Grip Jake’. He inspired bowlers. When Barry Rothwell first faced John Gleeson in the nets he told his New South Wales teammate Richie Benaud “this bloke’s bowling Iversons.”
Terrible batting and fielding added to his cult status. He scored 3 Test runs at an average of 0.75 — though that was not due to lack of confidence; he refused to give strike to senior batsmen. He was an even worse fielder, escorting balls at the pace of a “Republic Day procession,” as per NS Ramaswami.
His career ended abruptly after he was thrashed by Arthur Morris and Keith Miller in a Sheffield Shield match. That ruined his confidence and he retired almost immediately. He did tour India in 1954-55, where, among other things, he dismissed Ghulam Ahmed with an underarm ball.
He played club cricket till 47, became an ABC commentator, and returned to the real-estate sector. Then, in his fifties, he suffered from a stroke and became more and more secluded and withdrawn. He lost both parents in a span of three years, which sent him into depression.
In 1973 he suffered another blow when he was not paid the commission for a sale he thought he was responsible for. That was probably the trigger for him shooting himself with a Remington .22 in his garden shed. He was 58.
Abhishek Mukherjee