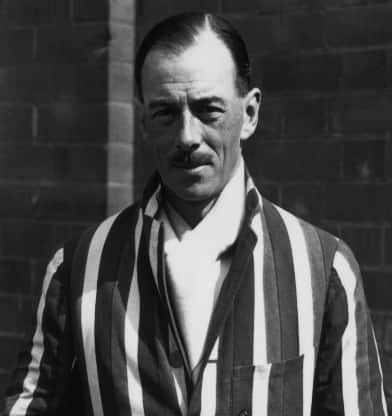 Jack MacBryan played a Test, at Old Trafford in 1924, but that was about it: South Africa scored 116 for 4 after two-and-three-quarter hours of cricket on Day One. Rain washed out the rest of the Test.
Poor MacBryan never played again, though he did tour South Africa later that year. He neither batted nor bowled nor took a catch in his entire Test career. A handful of others have faced the same scenario on Test debut, but they played more Tests.
MacBryan was solid but not prolific. His back-foot style of playing made him ideal against short-pitched bowling and spin, though opening batting for England demanded more than that.
His 10,322 First-Class runs, mostly for Cambridge and as a Somerset amateur (after leading Exter School), came at 29. However, he was the best Somerset batsman in the first half of the 1920s. His best season was 1924, when his 1,608 runs came at 41 and he was named a Wisden Cricketer of the Year.
But MacBryan is remembered reasons outside cricket. He fought gallantly in The Great War. He was injured in his right arm at Le Cateau, which meant he did not have the greatest throws. He spent several years as Prisoner of War in Holland.
MacBryan also played hockey for Cambridge. His career reached its pinnacle when he became a part of the Great Britain and Ireland side that won the gold medal in field hockey in the 1920 Olympics at Antwerp.
Unfortunately, he did not have a smooth personal life. He had a strained relationship with his parents. His marriage did not last. One job after another did not work out. He suffered financial losses late in his life.
MacBryan was 8 days short of his 91st birthday when he died in 1983. He was, at that point, the oldest-living Test cricketer.
Abhishek Mukherjee