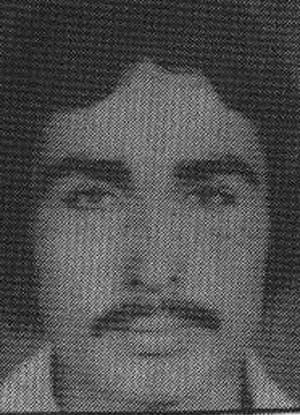 Jalaluddin, sometimes spelled Jalal-ud-Din, was the first bowler to take an ODI hat-trick. He achieved this at Hyderabad (Pakistan) in 1982-83, against Australia: with the last three balls of his seventh over he bowled Rod Marsh, had Bruce Yardley caught behind (by Wasim Bari), and bowled Geoff Lawson. He took 4 for 32 that day.
It was only his second match. Surprisingly, his career was restricted to 8 ODIs, from which he took 14 wickets at 15. Of all bowlers with an ODI hat-trick, Jalaluddin had the second-shortest career. He also played 6 Tests in which he took 8 very expensive wickets.
Of course, he had to compete with the likes of Tahir Naqqash, Rashid Khan, and Azeem Hafeez when Pakistan were in search for Imran Khan’s new-ball partner in the era between Sarfraz Nawaz and Wasim Akram. His runs mostly came as an outcome of Imran’s habit of opting out of selected matches.
Jalaluddin did not look like a fast bowler, mostly because he bowled with glasses on. He was not express, but he could get lift and some pace off the surface. He did have an excellent First-Class career, taking 261 wickets at 24 from 70 matches.
In later years, he became the first coach to receive both ECB and PCB accreditation. His brother Salahuddin also played First-Class cricket.
Abhishek Mukherjee