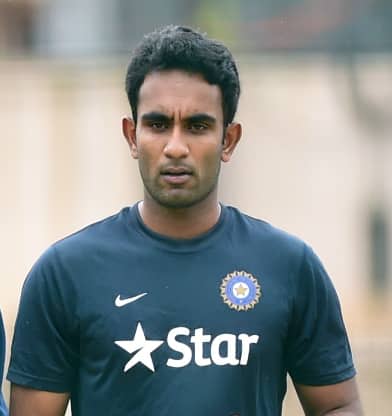 A tight off-spinner and a handy batsman down the order, Jayant Yadav made his First-Class debut at 21. He picked up 6 wickets on debut game against Gujarat to help his side to a big win. In 2012, he was noticed for his batting prowess by scoring 211 against Karnataka, sharing a 392 for the eighth wicket with Amit Mishra. Jayant’s all-round skills give him an edge over his competitors as he can act as a valuable back-up to Ravichandran Ashwin in future.

Early in his career he had played a touring England XI in Ahmedabad, getting 4 wickets including Alastair Cook. His finest season was 2014-15, when he topped Haryana’s tally with 33 wickets, including 13 against Saurashtra at their den, Rajkot. This earned him a call-up for India A.

At the same time he made his way up the batting order. He slammed another First-Class hundred, this time at No. 4, and took 6 wickets in Karnataka’s second innings. Roughly around this time he was mentored by Virender Sehwag. He finished the season with 8 wickets against Mumbai in the Irani Cup, remaining unbeaten as his side chased down 480.

Yadav got a taste of IPL after being signed by Delhi Daredevils (DD) in 2015. Though he played only 3 matches, his economy rate of 4.14 surprised everyone. In 2016 he got 3 more matches.
He made his ODI debut against New Zealand at Visakhapatnam later that year, taking a wicket. Shortly afterwards came the Test debut, at the same ground, against England. He played two crucial cameos of 35 and 27* and claimed 4 wickets.