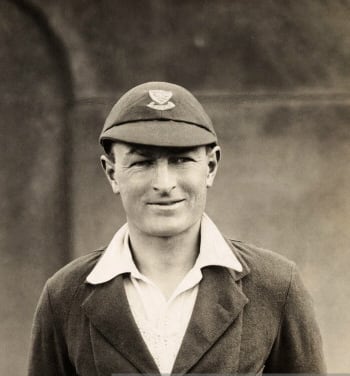 Jim Parks Sr played a solitary Test, but his between-Wars career for Sussex makes him stand out. Even if we ignore everything else, the fact remains that he scored 2,847 runs for Sussex in 1937; his long-time colleague James Langridge is the only other one to have scored more: Langridge got 2,850 in 1949.
In that season he scored 3,003 runs in all First-Class matches, at 51; he got 101 wickets as well, at 26. Parks remains the only cricketer to do the 3,000 run-100 wicket double in a single season. In all he scored 21,369 runs at 31 and captured 852 wickets at 27.
His only Test also came that year, against New Zealand at Lord’s. He scored 22 and 7 at the top but took 2 for 26 and 1 for 10 — but never played again. Of course, he had toured Australia the previous winter, but did not get a Test. He also toured India the following winter with Lord Tennyson’s XI, but the matches were not given Test status.
An excellent strokeplayer, Parks was never short on bravado, even against fast bowling. He and Langridge made a formidable pair for Sussex at the top. He also bowled medium-paced leg-cutters, and could swing the ball in if the conditions assisted in. He also manned cover-point with some proficiency.
Parks started playing serious cricket much later (his early teens coincided with The Great War). However, almost immediately after making his debut he routed Leicestershire with 24-15-17-7. And his maiden hundred, 162, came against Harold Larwood and Bill Voce.
He played Plunket Shield for Canterbury after World War II. By then his son (of the same name) had made his mark for Sussex; he would play 46 Tests for England. His son Bobby had a reasonably long career as well, albeit for Hampshire and Kent.
Cricket had always run in the family: Jim Parks Sr’s brother Henry also had an accomplished career for Sussex in the middle-order. Their sister married Dick Richards, another Sussex cricketer.
As for Parks Sr, he later coached Sussex, and passed away at 77.
Abhishek Mukherjee