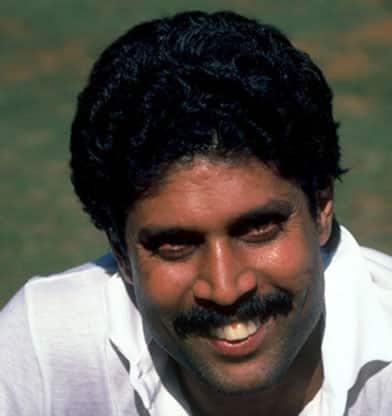 If there is one man who changed the face of Indian cricket to an unrecognisable degree it is this Haryana Hurricane.

When he arrived on the scene, spinners were often handed the new ball after it had been rubbed on the turf. 'Speedsters' who opened the bowling included men like Budhi Kunderan and Sunil Gavaskar. India was a land of spinners where no one bowled fast. Kapil changed all that by producing enough pace on his debut to force Sadiq Mohammad to don a helmet.

And then it was discovered that he could bat too, with enough talent to be a top-class batsman if he put in the effort (he had a strike rate of 95 in ODIs before the era of field restrictions). He could hit the ball often and a long, long way. Kapil was a genuine all-rounder, a fast-bowling one, the sort that India had never seen before. No wonder he captured the imagination of millions. Suddenly, young lads were seen embarking on long and rhythmic run-ups in every level of friendly and serious cricket around the country. He brought about a revolution.

Here was a man who could blast out the opposition with pace and incredible swing and earn India victories. He did that too, adding spirited contributions with the bat when required. He could take five wickets and belt a hundred. And as he showed at Melbourne in 1981, his animal athleticism and simplicity notwithstanding he could bowl with his head. Struggling with an injury, he bowled Australia out in the final innings as India defended a low score to win a famous Test.

From 1977 to 1983, Kapil remained comparable to the top all-rounders of his era, a group that included Ian Botham, Imran Khan and Richard Hadlee. He could hold his own in that formidable group, with both bat and ball, and in the outfield he was the best of the lot. Yes, apart from being the best fast bowler ever produced by India and one of the most talented lower order batsmen, Kapil was also among the most versatile fielders of the country. There was nothing he could not do. He was, without a doubt, the most natural cricketer the country has produced.

Soon this many-faceted genius was given the additional responsibility of captaincy, and he led India to a surprise triumph in Prudential World Cup 1983. Kapil himself played a leading role with bat and ball, stunning the world with a blistering 175 not out against Zimbabwe to snatch a victory from an impossible situation. It was the first ODI hundred by an Indian. Earlier in the tournament he had taken 5 for 43 against Australia — the first ODI five-for the country. Indian cricket would never be the same again.

With time, his bowling lost the lethal edge. The latter half of the 1980s saw him struggle to take wickets. The famous banana swing of his earlier years became less potent and erratic. His batting remained effective in patches as ever, and county stints gave his fielding an extra dimension with experience in the slips. But, he was no longer the bowler he used to be.

After the World Cup, the captaincy was not uniformly successful. There were musical chairs for the top job with Sunil Gavaskar, the other Indian icon with whom Kapil did not always enjoy the best relationship. There was even one time that his casual approach with the bat cost him his place in the side. When India lost to England in the semi-final of the Reliance World Cup in 1987, Kapil was removed as captain.

He continued to be one of the key members of the side, his bat and ball occasionally rekindling the deeds of the past. Even in the 1990s he enjoyed an excellent series in Australia. Perhaps he lingered a bit too long in pursuit of the world record of Test dismissals. He retired as soon as he had overtaken Richard Hadlee, his ultimate number of wickets reading 434. Alongside over 5,000 runs it certainly makes for formidable reading.

After his retirement, Kapil had a turbulent and unsuccessful 10-month stint as the coach of the Indian team. There followed controversies with Manoj Prabhakar claiming his involvement in match-fixing.

In 2002, he was voted the Indian cricketer of the last century, ahead of Sunil Gavaskar and Sachin Tendulkar.