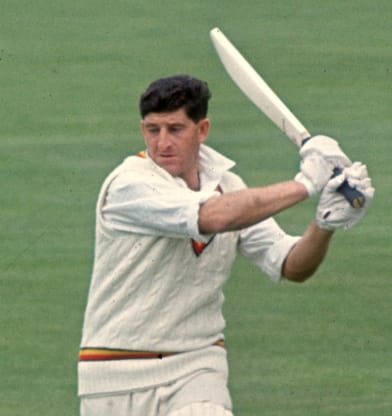 His 6,806 runs came at 58.67, an average greater than his contemporaries that included Garry Sobers among others. He could have got more but for his retirement at the age of 37 following a heart-attack.

He had followed up his playing career as a manager, and had been a spot of joy and a soul of sunshine in this difficult role. His remarks, lovably laced with malapropisms, raised chuckles from the gladdest depths of the heart. His smile was wide, above it his nose huge and immediately recognisable, and his kindness all-encompassing. When he collapsed to his death during the West Indian tour of 1980-81, the shock of the cricket world was heartfelt. He was just 50.

As batsman he was as great as his figures suggest, although not as widely acknowledged as one. Perhaps it had to do with the lack of the flamboyant cover drive-that characterised a May or a Cowdrey or the stylish cut of a Dexter. His slow batting in fact once led to his being dropped in spite of a century, for it so negated the principles of brighter cricket.

Yet, no English batsman has ever scored as many runs at as high an average, a list that includes Wally Hammond. Among all those with a reasonable collection of over 2,000 runs, only Herbert Sutcliffe manages to eclipse him. In the all-time list across teams he is at fifth based on this criterion. Raise the bar to 2,300, and only Bradman and Sutcliffe manage to stay ahead. Barrington might not have been the batsman people loved to watch, but he was one of the best of all time.

Even when he was going through a bad patch, he was a delight to have in the team. When a Surrey fan was sympathising about his lack of form after two ducks and two more innings worth little more, Barrington asked, “How d'you know I’m out of form? I’ve only had nine balls all week!” Hilarious, but tinged with wisdom.

Making his way from a local garage — perhaps another reason, and an unpleasant one, for his lack of fan following among the elite — Barrington shifted to groundstaff at Reading Cricket Club as a leg-spinner before turning into one of the greatest batsmen of all time. It was lucky that his batting clicked, because with Lock, Laker, Loader and the Bedsers, Surrey did not really require another bowler those days. He could be a punishing stroke-player in his early days, but became more and more circumspect with the years.

Through the second part of the 1950s and almost all of the 1960s, Barrington remained the bulwark of English batting. When the ICC rankings for batsmen were retrofitted for the past, we find him in the top bracket for most of his days, and during a phase in the mid-1960s at No. 1. No easy feat that, when one’s contemporaries were Sobers and Graeme Pollock.