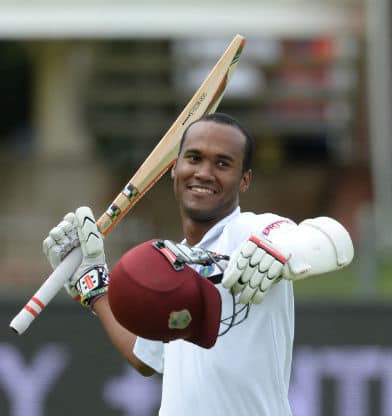 West Indies selectors had drafted in 17-year-old Kraigg Brathwaite in 2009 when the seniors went on a strike against the board. By then, he had established himself as a class-apart opener. For that matter, he scored a stunning 73 on his First-Class debut for Barbados at the age of 16. Following his impressive performances, he was an obvious choice for the West Indies national team. However, he did not star in the playing XI, for there were players who had more experience on their CVs.
A year later he represented West Indies in the Under-19 World Cup 2010. He maintained his reputation of a consistent run-scorer. He ended up being the second-highest run-scorer, bagging 4 half-centuries.

Meanwhile, he continued amassing runs in First-Class cricket, which eventually earned him a Test cap against Pakistan in 2011.
It took Brathwaite 4 innings to rise to fame, as his first half-century came against Bangladesh in a winning cause, their last away victory until November 2016. Armed with resilience and patience, Brathwaite has the knack of playing long innings.
Despite the team being thin on experience, Brathwaite continued his stellar performances. He has centuries against Bangladesh, Pakistan, New Zealand and South Africa.

Brathwaite is a back-foot-oriented batsman. Rarely does he lean forward to play drives on the off. He stands tall instead, playing it a late. All the same, he is a remarkable player of spin. In fact, he pursues old-fashioned cricket, as he plays with soft hands and often scores at a strike rate in 40s.

All said and done, he plays a major role in West Indies’ victories, be it his unbeaten 142 against Pakistan at Sharjah (when he carried his bat in the first innings and remained unbeaten during the chase as well) or the characteristic 129 against New Zealand at Port-of-Spain.

The vice-captain of the side, Brathwaite is a vital cog of West Indies’ Test side.