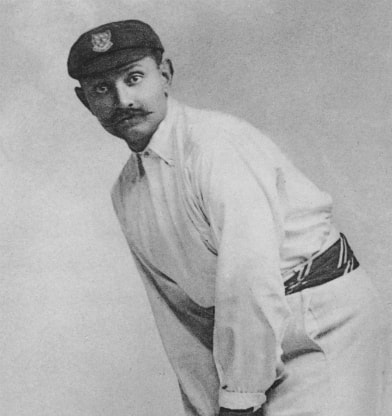 The ‘balls left his blade with the swiftness of thought’. Some others claimed that the ball flowed from his bat like water rushing down a hill. His first match for Surrey against MCC at Lord’s had brought him 77 not out and 150 and anything finer than his hitting had never been seen at Lord’s.

The suppleness of his eastern wrists had led him manufacture the novelty of the leg-glance, played fine — in arcs that defied the hardcore logic of batting of the day that dictated balls to be hit back in the direction from whence they came. He discovered angles that were acute and mysterious. And his late cut was such that it was claimed, “envious gods are still practising it in the Elysian fields.”

His methods were equated with the many splendored treasures and enigmas of the land from which he hailed. “He combines an Oriental calm with an Oriental swiftness — the stillness of the panther with the suddenness of its spring,” wrote AG Gardiner. And his steadfast friend for life, CB Fry said, “One would not be surprised sometimes to see a brown curve burnt in the grass where one of his cuts has travelled, or blue flame shiver around his bat in the making of one of those leg-strokes.”

The lithe form of Prince KS Ranjitsinhji could be recognised by all who could distinguish a cricket bat from a walking stick. While his strokes sparked and sizzled with lustre that was unique, even while he fielded the crowd could pick him out with ease as he waited like a coiled spring at slip or moved sharply in anticipation at point. Everyone knew how his hands found each other behind his back between the deliveries, how the back of his gossamer shirt fluttered in the wind while tremors rippled down to the wristbands which he always kept so tightly fastened.

Neither was he all style, for substance there was plentiful. There were plenty of innings of importance, including the century on Test debut for England, after Lord Harris, supremo of MCC and principal selector, had said he was not in favour of playing ‘birds of passage’.

Earmarked for the throne, though not of royal blood, Ranji was educated at the Rajkumar College. He was sent to Cambridge but never graduated from Trinity. Later he used his cricketing connections to great effect to become the ruler of the small state of Nawanagar.

However, he was infinitely more important as the King of a Great Game.

Often his splendid skills in certain aspects of the game made us forget that the other facets of his batsmanship were equally impeccable. So distinctive was Ranji’s cutting and wrist play on the leg-side that one almost forgot to notice the strokes in front of the wicket. Not only was he a beautiful driver on both sides of the wicket in the classical sense, he could drive if he liked hard and high just like the professed hitter. His gift of timing allowed him to take on all roles with equal ease.

But in spite of enormous gifts, his success was rooted in the elementary lessons of batsmanship. Fry put it during their playing days: “Ranji appears scarcely to look at the ball or take any trouble. His electric flashes seem almost as insolently careless as brilliantly successful. Actually he watches the ball with feline insistence every time.”

The Ranji Trophy, the national championship for cricket in India, is named after him.