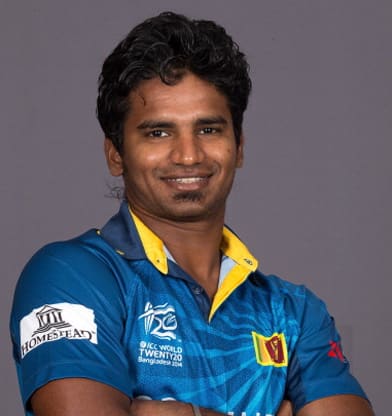 A right-hander by birth, Mathurage Don Kusal Janith Perera of Kalubowila switched to a left-hander at 13 after being inspired by the strokeplay of his idol Sanath Jayasuriya. Just like his idol, Perera can score extremely quickly, and his short-arm cuts and pulls are eerily reminiscent of the great man.
While the comparisons with the great Jayasuriya were inevitable, Perera backed them up with impressive scores in domestic circuit. He was a regular feature in Sri Lanka Under-19 in 2007, and made his First-Class debut for Colts CC in 2009.
He made his ODI debut in and against Australia in 2012, and scored his maiden ODI ton against Bangladesh in the next series. Though he failed to live up to his promise since, he had a resurgence of sorts in 2015. Perera scored a hundred and a fifty against Pakistan; the latter was the joint-fastest (a record he shares with his idol) by a Sri Lankan.
In 2012-13 he smashed 336 in just 275 balls with 29 fours and 14 sixes. It was the first triple-hundred in Sri Lankan domestic cricket. He made his Test debut in 2015, after Kumar Sangakkara retired. He made 56 and 70, therefore becoming only the second Sri Lankan batsman after Dinesh Chandimal to score two fifties on debut.
His impressive show enabled him to be picked for the 2015 World Cup, but he did not do anything of note.
While keeping wickets does come handy, it is certainly not enough for a batsman to retain a spot in the Sri Lankan side, since Chandimal, Niroshan Dickwella and Kusal Mendis all keep wickets. Perera needs to be more consistent with bat to retain a permanent place in the side.
Perera tested positive for a banned substance before Sri Lanka’s tour of New Zealand in December 2015. He was however cleared of all doping charges in May 2016.
Despite being dropped for the ODI series against South Africa and Bangladesh, Perera found himself in the squad for 2017 Champions Trophy.