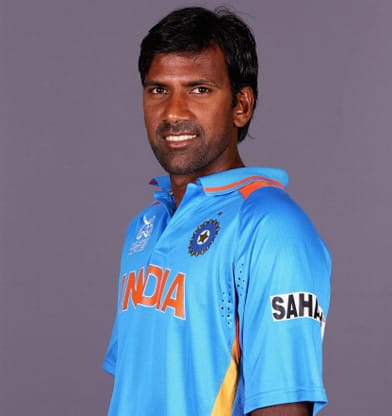 Perpetually armed with the brightest of smiles (that, if one has to believe the rumours, had won many a female heart on the Pakistan tour of 2003-04), Lakshmipathy Balaji is a medium-pacer with the ability to move the ball either way.
He had a terrible International debut against West Indies at Vadodara in 2002, but took it in his stride by delivering the goods with 13 wickets to his name during the VB tri-series held in Australia in 2003-04.
With unwavering self-belief and a singular vision to succeed, he also passed the litmus test of playing on flat decks of Pakistan in 2003-04 with flying colours — though it was his six-hitting off the fast bowlers that endeared him to the fans in Pakistan.
Unfortunately from Balaji’s point of view, he was laid low by a stress fracture on his back. He though, showed sheer willpower to make a comeback to play the ODI series against Sri Lanka in 2008-09. In 2012, he also played for India at the ICC World T20 in Sri Lanka, where he was one of India’s better performers.
Since his comeback Balaji has switched to a remodelled action that puts less stress on his body, but also results in restricting his natural swing. He makes it up with his subtle variations in line and pace. Balaji has also tasted success in the Indian Premier League (IPL). He has represented Chennai Super Kings, Kolkata Knight Riders, and Kings XI Punjab.
Bharath Ramaraj