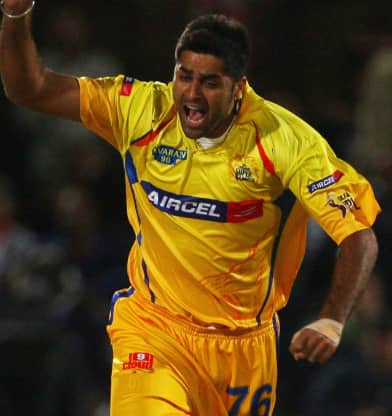 A brawny right-arm pacer, Manpreet Gony has a natural tendency to bang the ball short of length. Armed with a well-balanced jump and swift action, Gony burst into the scenes in the inaugural edition of IPL. He ended up as the highest wicket-taker for Chennai Super Kings.
His performance propelled him in the national squad for the 2008 Asia Cup. Receiving his maiden cap against Hong Kong, he bowled at a remarkable economy of 2.20 but went wicketless. It was against Bangladesh, his second game, that he opened his account at international level. He finished with 8-0-65-2, including the wicket of Mohammad Ashraful. As fate would have it, Gony never represented India ever since.
Gony has impressive figures in First-Class cricket for Punjab. Making his debut in 2007-08, Gony was a consistent purveyor of wickets in the red-ball cricket. However, he attracted more attention for North Zone in Deodhar Trophy, acing the wicket-taker’s list.
Gony has a knack of playing an odd innings of substance with the bat. He has three half-centuries to his name at First-Class level.
After his moment of success, Gony’s form subsided in IPL 2. Once a Chennai Super Kings mainstay, he was given nod in only 7 contests. That, or anything, did not fade his ambition of performing with distinction. He took 31 wickets at 19.29 in the 2009-10 Ranji Trophy.
Gony shares a unique feat of bowling most maidens (3) in T20 cricket.
On a side note, his wife is also called Manpreet.
Kaustubh S. Mayekar