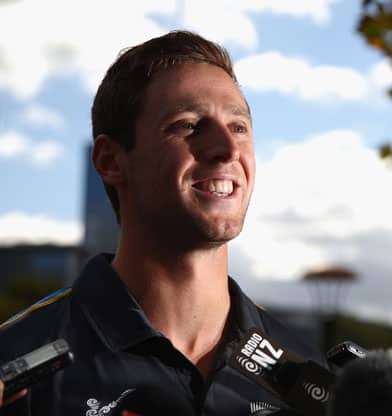 Matt Henry is yet another one of New Zealand’s growing arsenal of impressive pace bowlers. While not yet in the league of Tim Southee and Trent Boult, Henry is a reliable third seamer in ODIs. Relying more on pace and bounce than seam or swing, Henry showed what he was capable of on debut by taking 4 for 38 to help New Zealand beat India by a comfortable 87 runs at Wellington.

Initially omitted from New Zealand’s squad for ICC Cricket World Cup 2015, Henry eventually played both the semi-final and final after Adam Milne picked up an injury midway through the tournament. Henry claimed two of the three Australian wickets to fall in the final.

Henry further enhanced his already growing reputation by taking the best figures by a New Zealand bowler on Test debut at Lord’s (4 for 93 including wickets of Alastair Cook, Joe Root, and Ian Bell). Henry also showed another aspect of his game in that debut series when he scored a few useful runs at the death, often looking a secure, confident, and hard-hitting batsman, hitting three sixes off Stuart Broad in his second Test at Headingley.