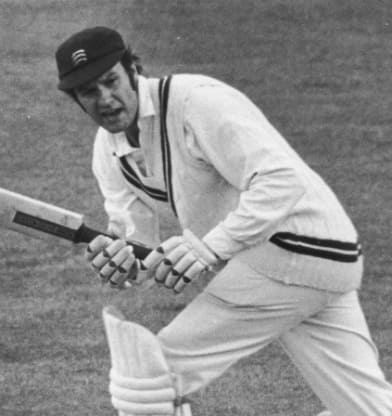 MJK Smith’s bespectacled looks were scholarly, hinting at a life in musty studies lined with book shelves full of forbidding volumes. Indeed he studied geography at Oxford — although never got around using his degree except perhaps when travelling the world with the England team.

At Oxford, he excelled as an athlete as well. From 1954 to 1956 he scored hundreds in the three Varsity encounters against Cambridge. He led both the cricket and rugby teams for the University. And in his final year, he played his sole international rugby match, against Wales as an outside centre. Although he modestly recollects that he had a poor game and was not selected for the national side again, he remains the last double-international to play for England. He went on to play 50 Tests for England, leading the side in exactly half of them.

Smith’s batting skills, which enjoyed immense success in First-Class cricket, were perhaps limited when it came to the highest level of the game. His proficiency against genuine fast bowlers was suspect, rather short of the benchmark for Test cricketers. Hence, his Test slot was seldom secure unless he was chosen the skipper of the side.

A batsman more pragmatic than stylish, Smith was a good judge of length and line. His technique was based on his academic mind which quickly analysed that but for off-spinners, most bowlers had a majority of their fielders on the off-side. Hence, he developed his pulls from wide outside off and also perfected the ability to work balls on the middle-stump to leg with a straight bat.

The one glaring shortcoming, along with ability to stand up to fast bowlers, was his running between the wickets. Yet, there was a spirit about him, indomitable courage that was displayed while marshalling his men on the field, he himself standing close at forward short-leg. This combined with his refreshing amiability as captain made him both successful and likable.

However, his stamp on the history of English cricket is far more prominent as captain. He brought a refreshing approach of easy professionalism during his days at the helm. Unlike some of his predecessors, Len Hutton, Peter May and Ted Dexter, who were also supreme batsmen, Smith did not believe in the captain regulating the discipline of the players with an iron fist. He hardly ever interfered with the way his bowlers wanted to bowl or the field they wanted. His reasoning was that someone good enough to play for England was expected to know the intricacies of line and length and field placement. At most, he would utter a word of congratulations at the fall of a wicket, delivered in his endearing absent-minded professor sort of way. But, in spite of his rather carefree attitude, even volatile cricketers like John Snow acknowledged that he was astute in his cricketing decisions.