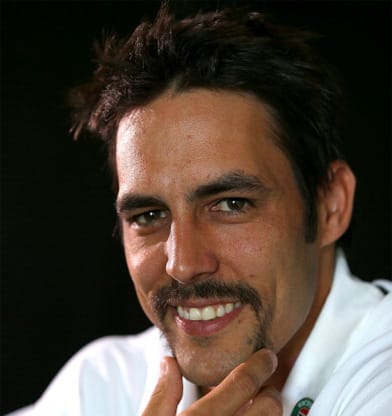 The handlebar moustache was the cricketing equivalent of Samson’s hair. Mitchell Johnson had always been an exciting left-arm bowling talent, with plenty of bounce — often steep, plenty of swing — often late, plenty of pace – often scorching and devious angles — often disconcerting. But, bouts of advanced waywardness, incorrect wrist position and chronic stress fractures had kept him in the promising bracket rather than among the greats where he had the potential to belong.

Spotted and backed by Dennis Lillee, he seemed destined for sporadic brilliance coupled with the unfulfilled tag. Then there was the second coming, with facial fungus adding the terrifying primal edge to old fashioned extreme pace. There were 37 wickets in Ashes 2013-14 at 13.97, only mildly tarnished by the threats to James Anderson. Following this he bowled Australia to a series win in South Africa with 22 wickets in three Tests. The spectacular display of sustained and scary speed and skill pitchforked him into one of the best in the world.

What is often overlooked is that Johnson bats well too, often with enough class to be taken seriously as an all-rounder. He can hit hard, straight, with full swing of the bat that is at once elegant and effortless, boasts of a Test hundred and several fifties and a healthy average. As a left-arm fast bowler Alan Davidson is unparalleled in Australian Test history, but with his Ashes resurgence and batting feats to match, Johnson has turned out to be a worthy successor.